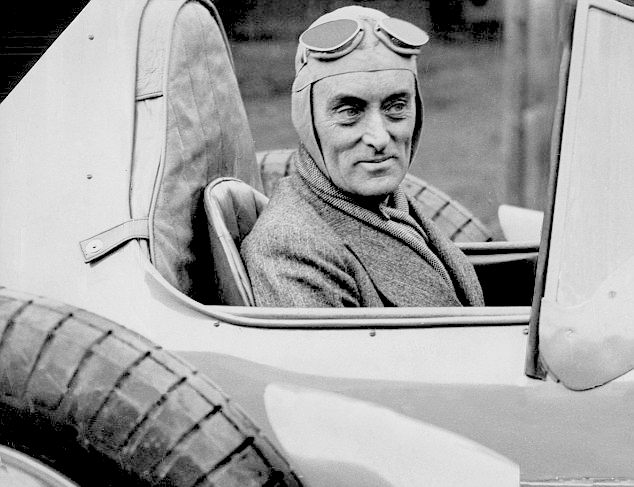 It was just over 80 years ago to the day that Sir Malcolm Campbell drove his beloved car known as Blue Bird straight into the record books. He became the first human being to reach 300mph behind the wheel of an automobile, that is if you want to consider the Blue Bird an automobile. This old girl was built with one thing in mind, speed and a whole lot of it. 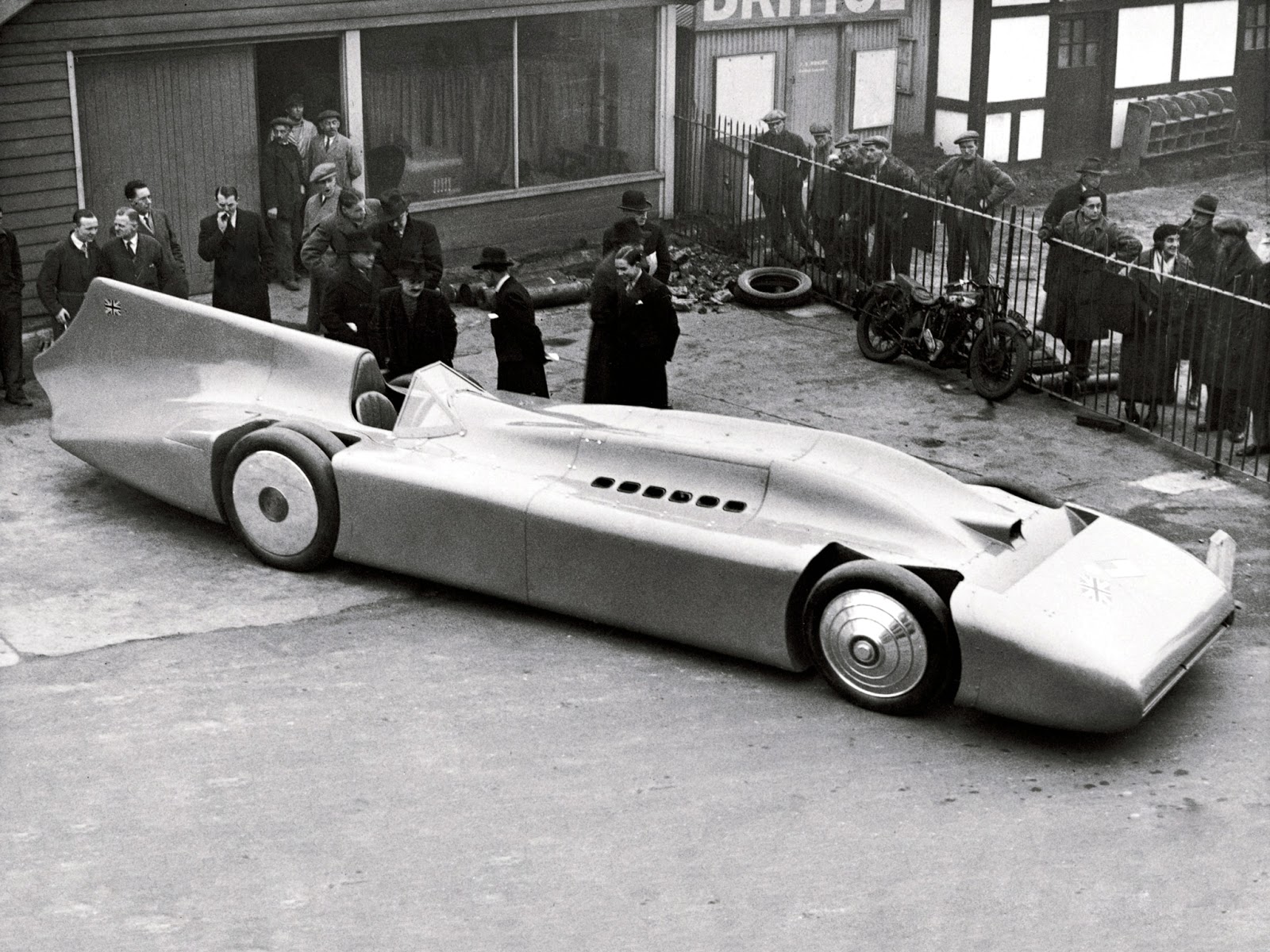 There was a few different versions of the Blue Bird that Campbell used over his career setting the land speed record numerous times. Here’s a short breakdown of each: 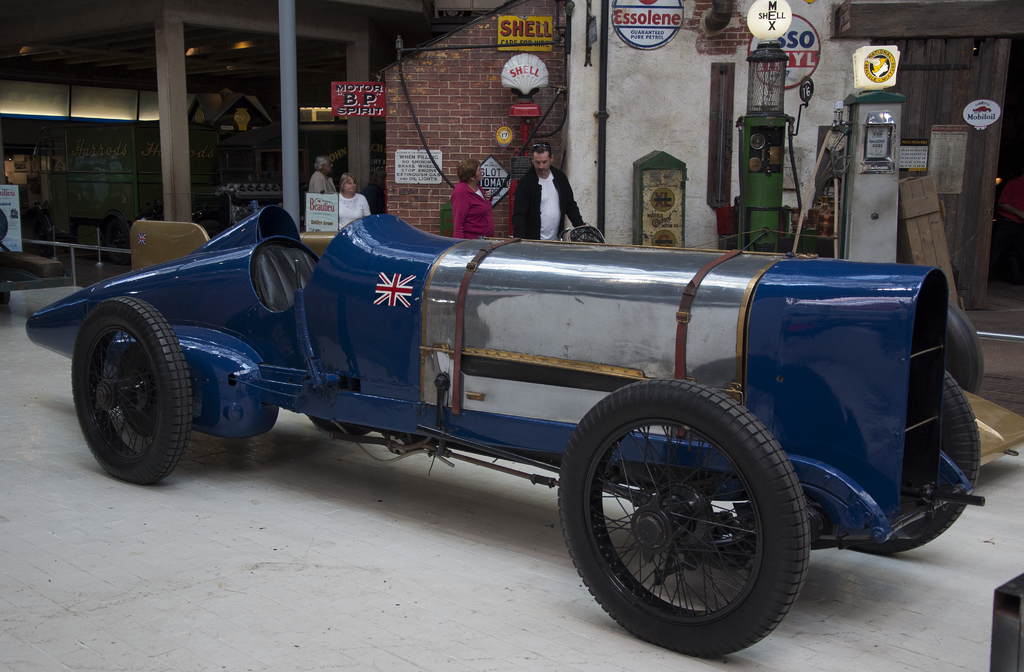 It was reported that the first time he beat the record was in June of 1922 when he hit 138.08mph at the Saltburn Speed Trials. He was driving a borrowed car at the time which was referred to as the Sunbeam that had 18L V12 engine that’s considered to be an airplane engine and was said to produce roughly 350hp. Shortly after that, Campbell persuaded the cars owner to sell it to him, then he painted the car blue and renamed it Blue Bird. Over the next few years he would use the newly named Blue Bird to set at least 9 land speed records. His best run was at the Pendine Sands in South Wales where he reached speeds as high as 152.833mph in 1925. 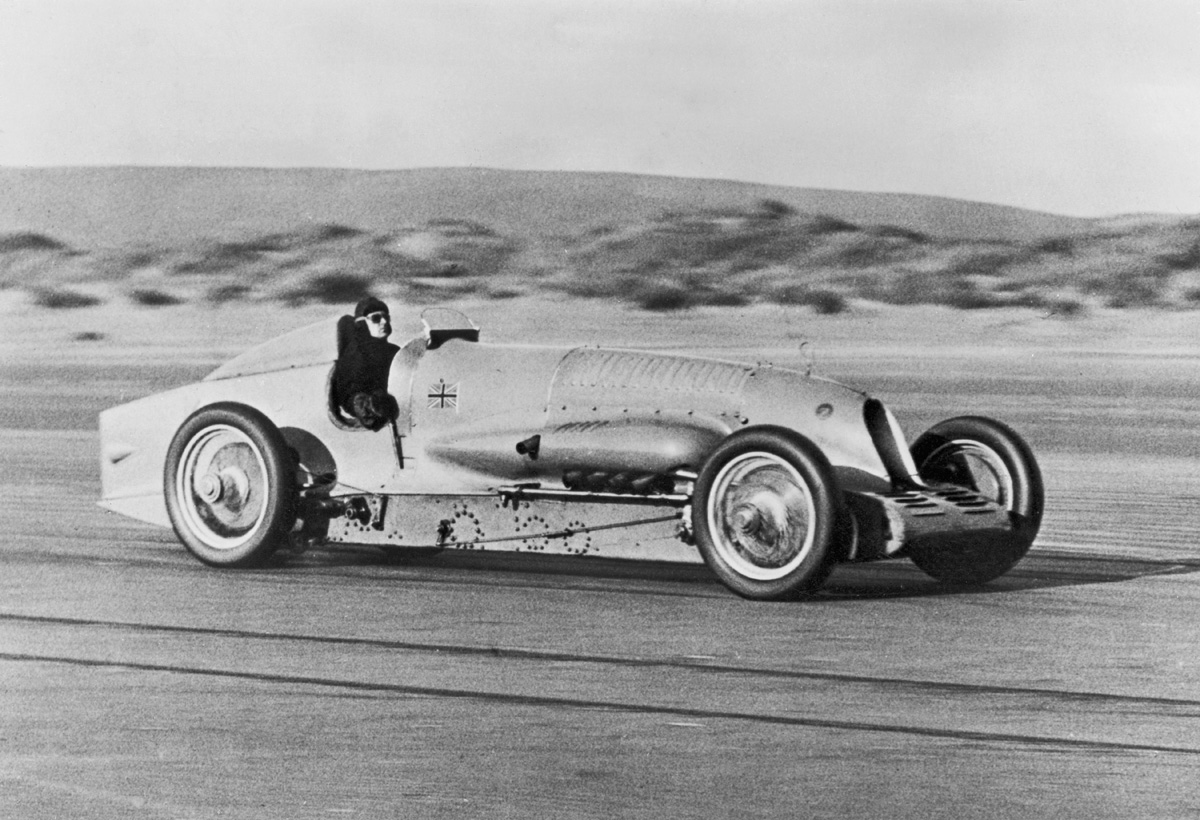 Now this is the car most people will think of when they first hear about Sir Malcolm Campbell and his Blue Bird that he started using in 1927. At least close to it because the other two versions are based off this design, just with different motors. At over 15 feet long this super sleek car was Campbell’s pride and joy. It was the first time he had used the Napier Lion aero engine in one of his land speed cars, but it wouldn’t be the last. The size of these engines literally dwarf even the biggest of modern day engines. The Napier Lion was a 22.3L V12 that was said to produce just over 500hp, which in the late 1920’s was some serious power. As a point of reference, the Bugatti Veyron, which currently hold the title of worlds fastest production car, has an 8.0L W16 engine. 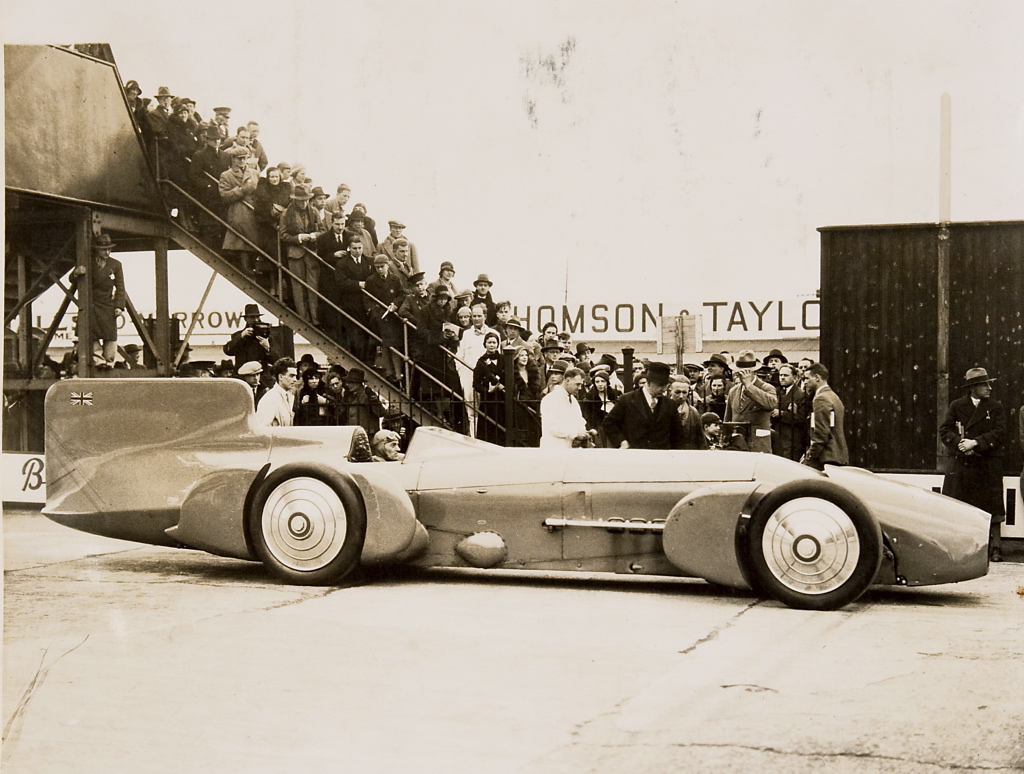 In 1931 Campbell drastically increased the power output on his beloved Blue Bird. The reason being was the competition had done the same. His arch nemesis and biggest competitor, Major Henry Seagrave, had taken his car called the Golden Arrow to Daytona Beach in 1929 and pushed the record to 231.45mph. The Golden Arrow was able to reach those speeds thanks to a slightly larger and highly tuned version of the Napier Lion aero engine that was 23.9L and produced a stunning 925hp. Not one to be outdone without a fight, Campbell decided to throw a supercharger on his engine which almost tripled its power output. It now produced 1,450hp and Campbell put his new, more powerful, Blue Bird to the test February 5th, 1931 at Daytona Beach. There he managed to push the streamlined masterpiece to 246mph! After this significant achievement Campbell went home to England, his home country, where he would receive one of the countries great honers, being knighted and officially becoming Sir Malcolm Campbell. The following year he would return to Daytona and increase his record to 251mph. 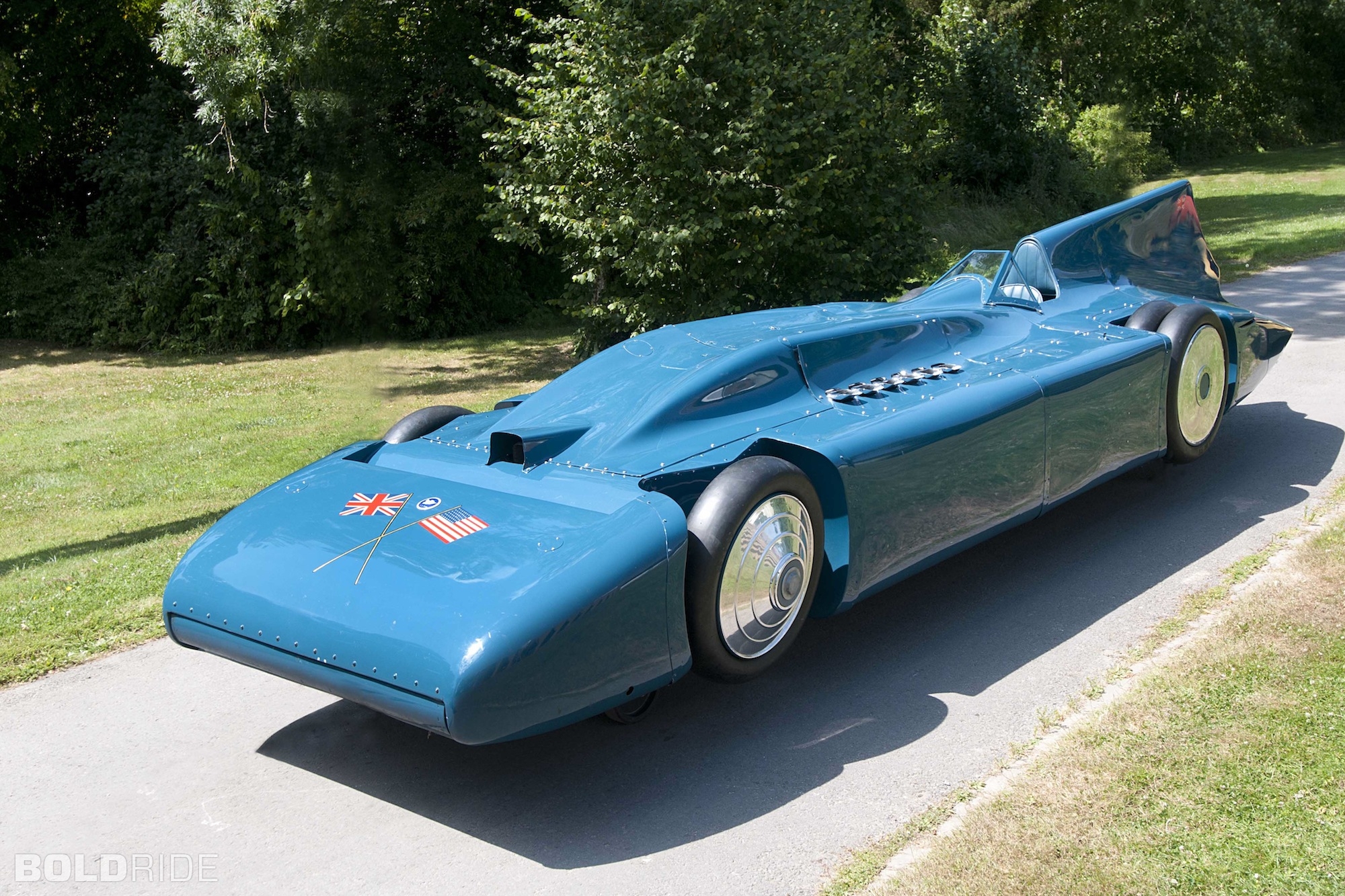 Now we have come to the last, and most powerful, version of the Blue Bird that was debuted in 1933. Although it very closely resembled the previous cars, it was actually totally re-worked. Almost all the mechanics of the car were changed, mainly related to the absolutely massive new engine. The chassis of the car had to be redesigned to handle the ridiculous power coming from the new Rolls Royce R V12 engine. When I say absolutely massive motor when we’ve already been talking about 22-23L engines you know it must be big. This new Rolls motor measured in at a whopping 36.7L as well as the addition of a supercharger. The power output, well it was reported in some places as 2300hp and others at 2500hp so either way we are talking about a seriously powerful car. The engine was so big that the hood that covered it had to be re-formed with two big knuckles down the middle just to make clearance for he engine cam covers. 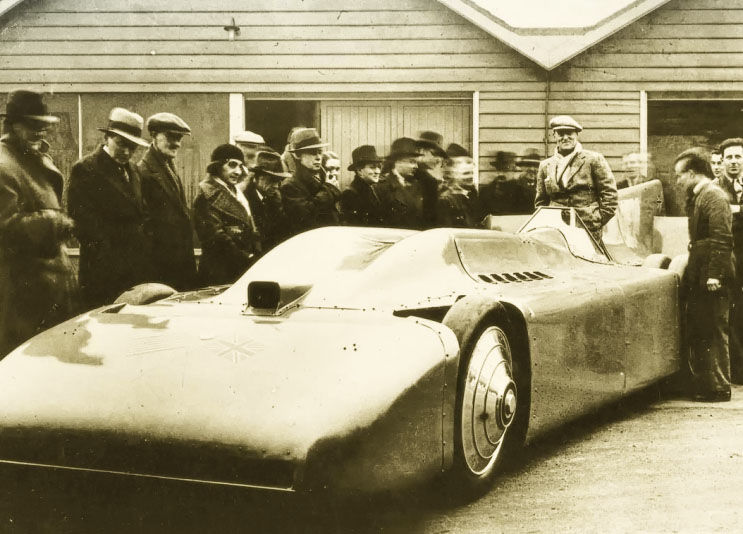 This last version of the car is what Sir Malcolm Campbell used to set his major records. After reaching 251mph at Daytona Beach just a couple years prior, he now had his sights set on reaching the elusive 300mph mark. Blue Bird most definitely had the power to reach those speeds, the problem was that it was extremely difficult for the car to use all that power. There are reports that the car was still suffering from wheel spin at speeds over 200mph. Some reports even claimed it was robbing the car of 50-80mph of top speed. Even with that being said Campbell was able to coax 272mph out of the car at Daytona Beach, February of 1933. 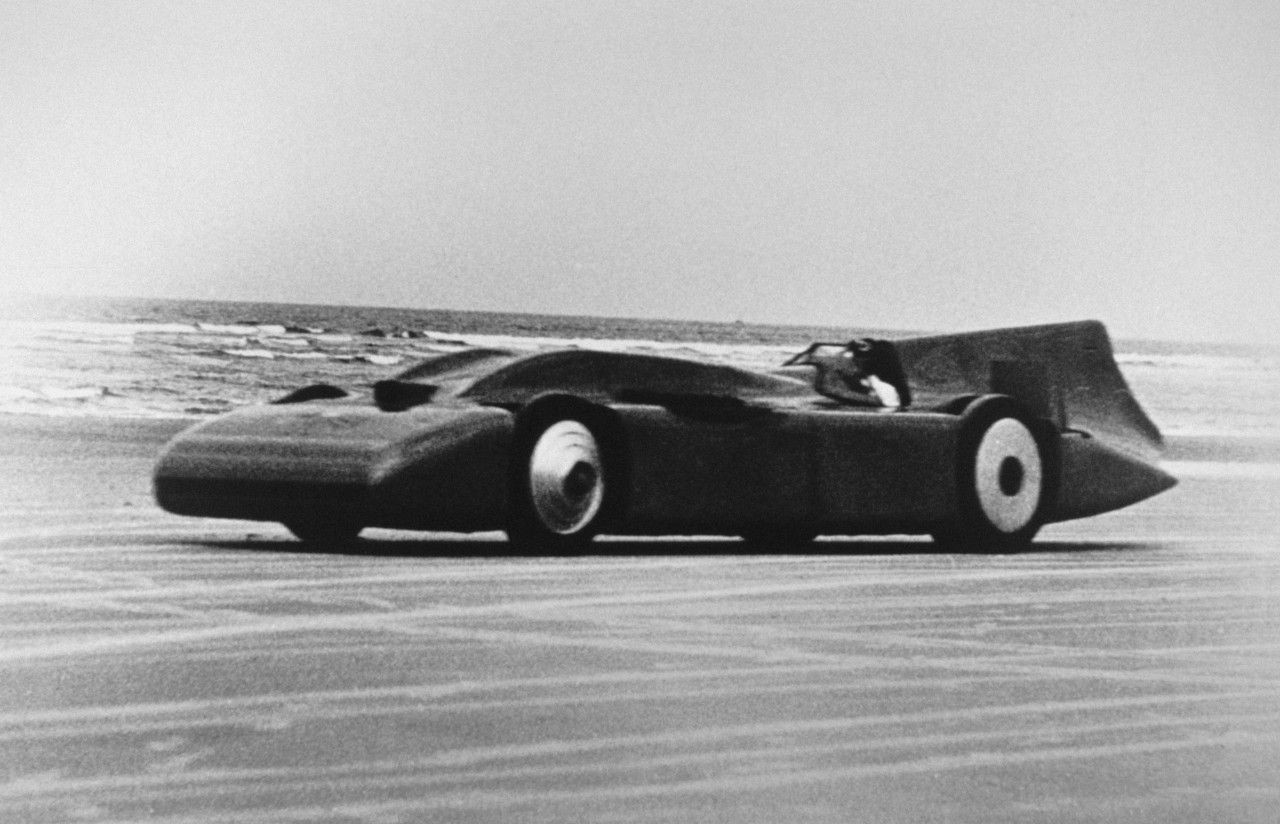 In 1935, Campbell and his team came up with a few modifications that were designed to help the car get its power down to the ground more efficiently, and hopefully help with the wheel spin problem. I cant even imagine how big of a rush it must’ve been to be driving this massive 27 foot long beast of a car at over 200mph, and experience wheel spin. One of the things they did to help with this, was fitting the rear axle with an additional set of wheels and tires essentially making it a “dually”. They also changed the bodywork so that it was spread wider along the axles which made the car appear to be much lower than it had before. Campbell took the new and improved Blue Bird back out to Daytona in March of 1935 where he, yet again, beat his own record with a top speed of 276.82mph. 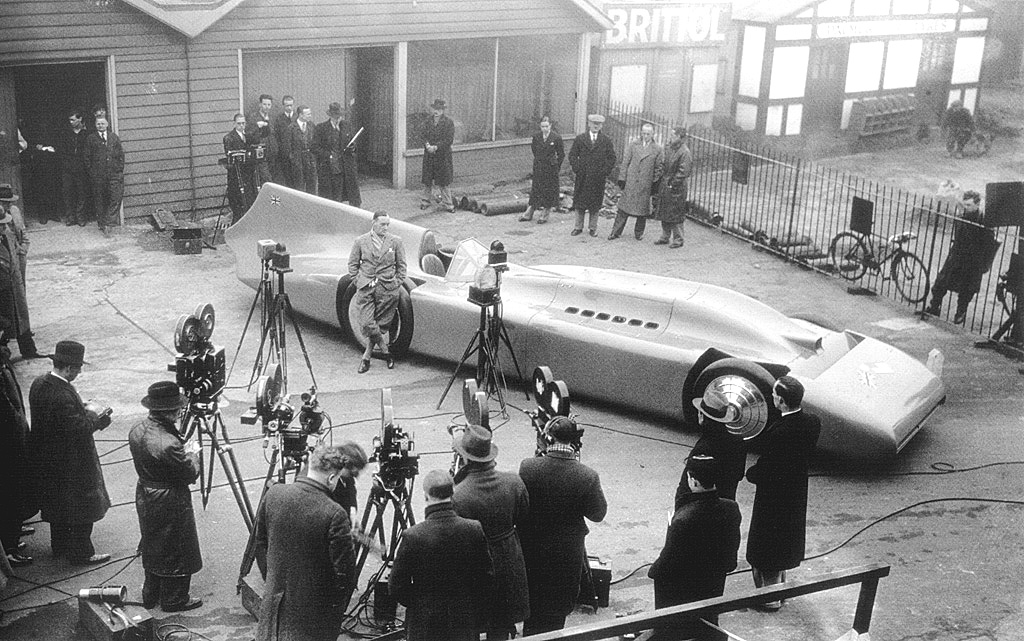 He still felt that the car was capable of more, but the course itslef was limiting him. If you have ever driven on sand you’ll know it is not even close to ideal for running at high speeds. But Campbell needed a place vast enough where he would have space to really let Blue Bird stretch her legs. This is when Bonneville Salt Flats came into the story. Located just west of Salt Lake City, Utah sits a perfectly flat area that stretches for miles and miles. It was the perfect location for his new, more powerful car. See even though the surface consists of very course salt, by the end of the summer it usually hardens up similar to that of concrete. Blue Bird was made for the flats, and Campbell was going to take advantage of that. 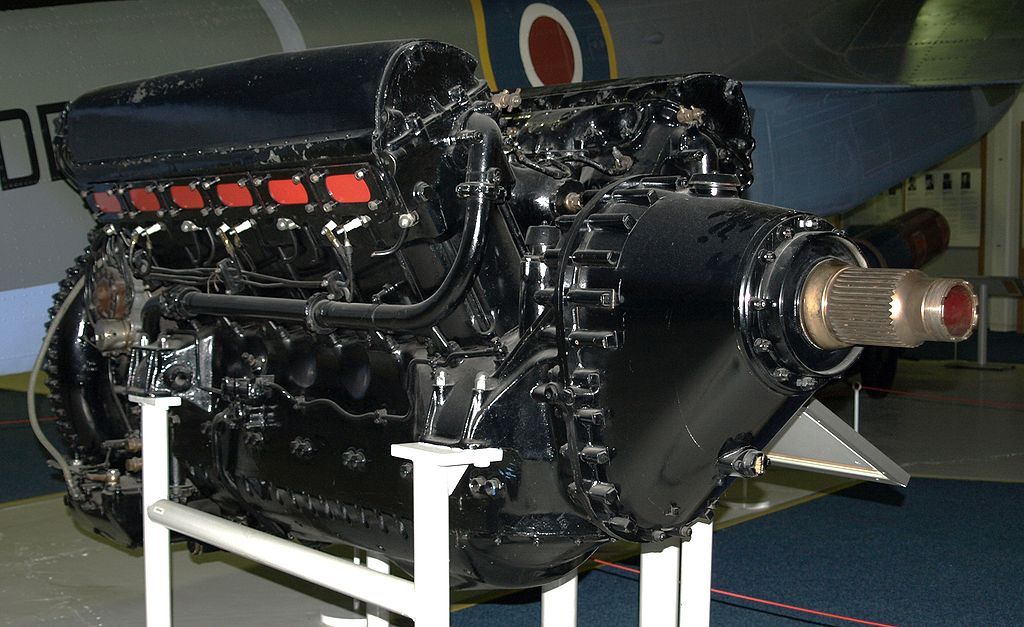 September 3rd, 1935 Sir Malcolm Campbell took his beloved Blue Bird out to the Bonneville Salt Flats where he drove it straight into the record books. The car that featured the 36.7L supercharged Rolls Royce airplane engine producing 2300+ horsepower managed to reach the elusive 300mph mark. With a land speed record you use two runs, and the combined average of those runs is what becomes the record. Campbell’s two run average was 301.337mph. All thanks to a massive blue car with a catchy name and monster airplane engine under the hood.

Here’s some old video footage shot from that day.