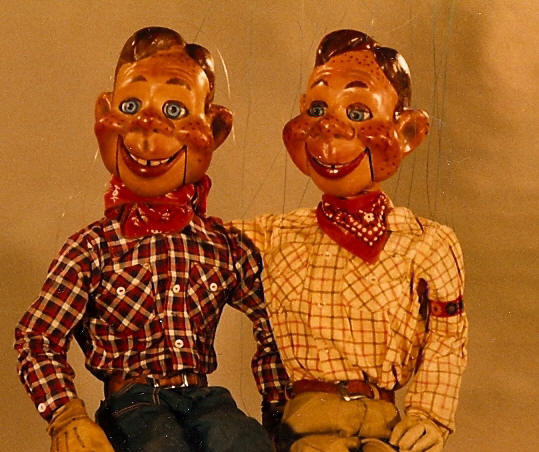 True to Hollywood form, the face of the star could not suffer damage. They worked hard to create a more rugged version of Howdy Doody for skits where the Doody took a spill. It wasn’t easy. The double, known as Double Doody (I know, I know), looked close enough for the cameras. Producers tested Double Doody with kids off camera to see if they could tell. They could, but only up close. HIs cheekbones were higher. He had brighter eyes. But, in the end, he ended up being as valuable as the OG Doody. The Smithsonian bought Double Doody for $100,000. Read that again without balking.

To be fair, hitting kids was a means of communication in the 1940s. A swift smack let a rambunctious kid know, “hey pal, what you’re doing needs to stop, k?” As the show was wont to do, they used to film commercials between takes. One day, while filming a Kellogg’s Rice Krispies commercial, a kid kept putting his hand in front of the product shot.  “When the commercial was over, I was so angry at this kid that I took the box and swung it around to the left,” Smith told People magazine in 1987. “I just wanted to hit him in the face a little, to remind him not to do that anymore. As I did, he ducked, and the sweetest little girl got the box right in her face and got a bloody nose.”

21. Smith Had a Heart Attack

While it’s true that actors on a series today can make bank (the cast of Friends, ahem), when TV started it was not such a money-making business. One had to work more than one job to pay the bills in the 1940s. Smith had two gigs; “Howdy,” and “The Bob Smith Show.” By 1954 it all caught up with Bob. “Labor Day morning in 1954 I woke up at 5 a.m. with the worst, most crushing pains you could imagine,” Smith told People. “After I got out of the hospital, NBC built a set in my basement in New Rochelle.” For eight months they filmed in his basement until he was well enough to return to work.