For most of us, a good candy-coating of paint on our car is good. As long as there’s no rust, no scratches, we’re content. These days we only get about four color options in new cars anyway.

That may be the reason that provoked these car owners to take matters into their own hands.

It’s about to get weird in here. 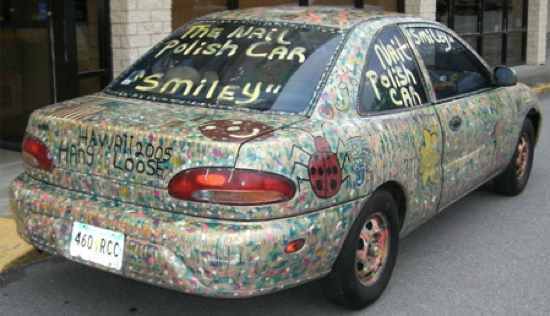 There are so many Mitsubishi Mirages on the road, Yvonne Millner decided to pimp out her ’96 with new paint to make it unique.

We use what we know. Millner knew nail polish, which is exactly what she used to paint her whip.

This, she did not execute in one session, but many sessions starting with a smiley face. The car is now covered in a rainbow of color.

She named the car Smiley, after the first icon. 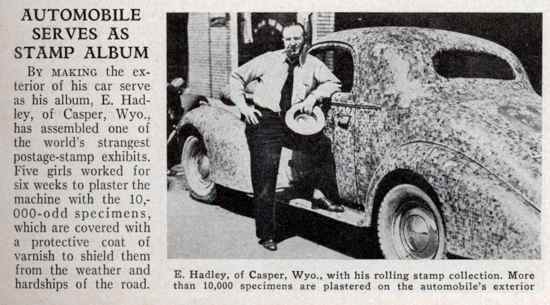 How many stamps does it take to cover a car? We can’t say for certain every car, but the one owned by E. Hadley from Casper, Wyoming took somewhere in the neighborhood of 10,000.

Hadley didn’t do it himself. He enlisted five girls to do all the licking.

It took them six weeks. Then he varnished the car to seal them in place… the stamps, not the girls. 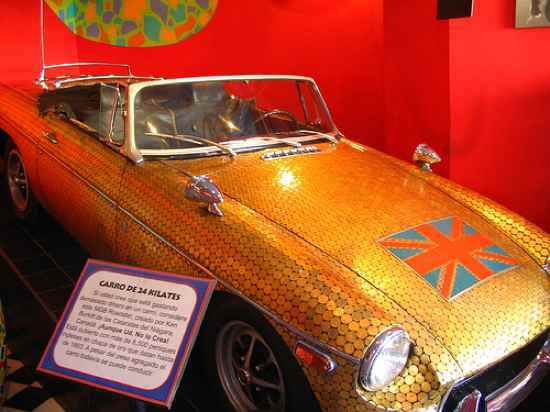 This is not the only car Ken Burkitt covered in gold coins. He’s covered several in coins.

His technique is to bend the coins with a vice until he has them in the right shape to fit whatever part of the car he intends to place them.

Then he coats the car in eight layers of varnish to ensure they’ll stay in place.

One has to wonder what all that weight does to his gas mileage. Somehow I doubt he cares. 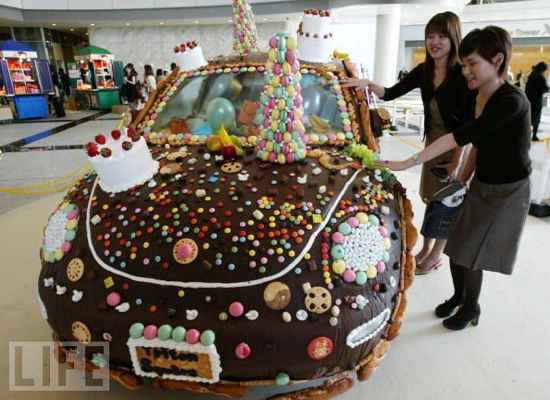 For the record, this writer subscribes the idea that any food is better dipped in dark chocolate. The key word being food.

In 2007, a Chinese car company covered a VW Beetle with 440 pounds of chocolate for Valentine’s Day.

I was relieved to hear they saran-wrapped the car first so they could save the chocolate. 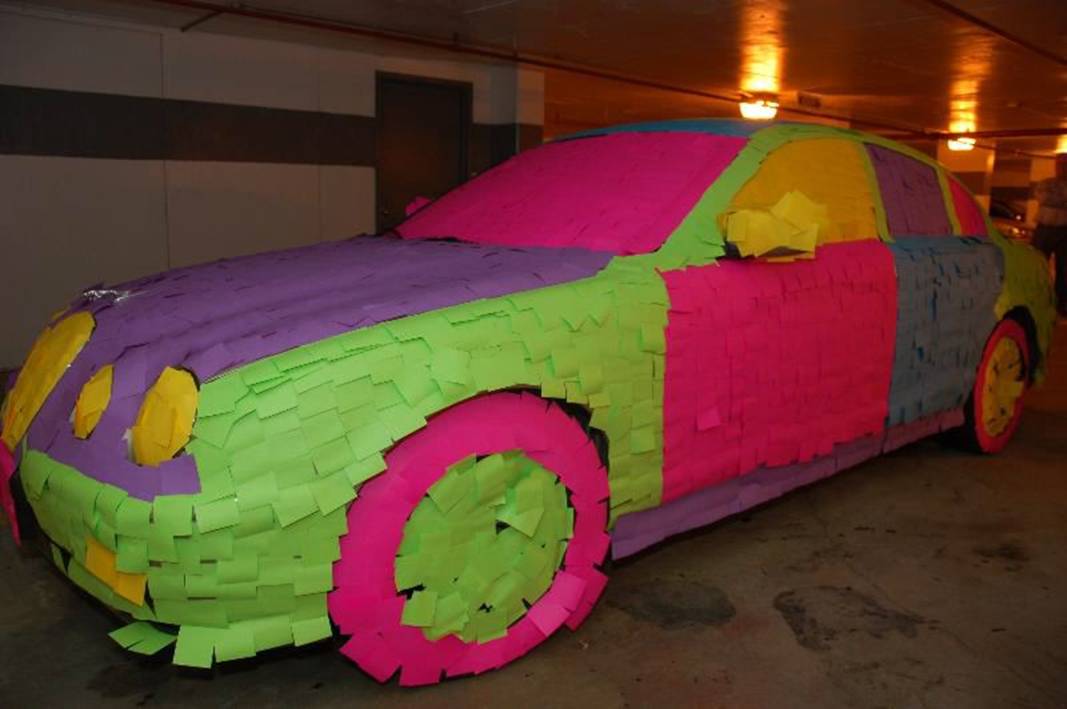 It was a prank committed in Washington D.C. of all places.

When Scott Ableman left work one day, he found his Jaguar covered in sticky notes, 1,400 of them to be exact.

His work cronies had done the deed. Ableman wasn’t mad. In fact, he was so impressed he cleared the windows then drove home to show his family how much everyone loves him.

You can get away with anything in D.C. 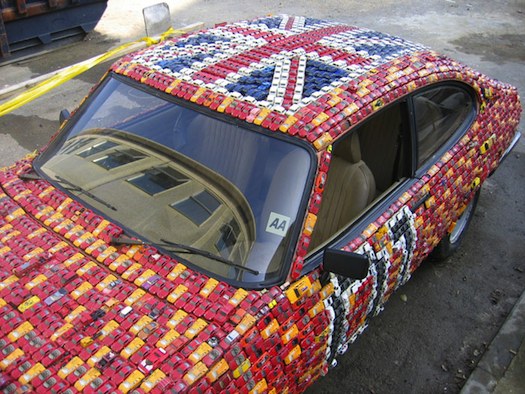 How clever, covering your car with little cars.

When James Ford, an artist living in the U.K., bought his 1981 Ford Capri, he saw only one course of action. He needed to glue some 4,000 toy cars to said Capri.

Ford bought about 2,000 of them. The rest he received as donations from around the world.

He named his newly decorated Capri, the General Carbunkle. 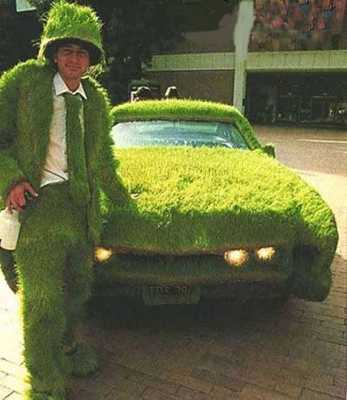 While there is certainly a green quality to Gene Pool’s car (yes, that’s his name; he’s an artist) it’s not going to offset the carbon footprint of the car beneath it.

Pool is from Brooklyn, where he makes his grass art, which extends beyond just the one car.

He’s covered two Buick LeSabres, a bus, and various items of clothing with his grass-growing technique. 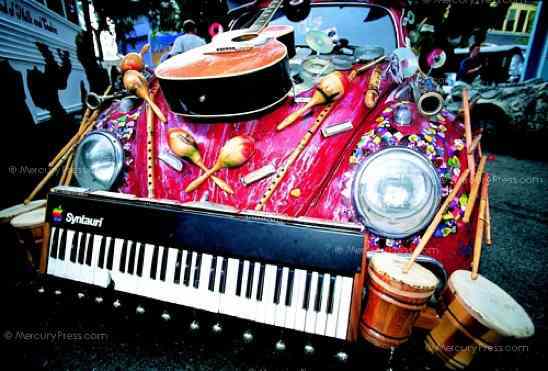 Harrod Blank saw an opportunity to bring those two instrumental worlds together in one VW Bug.

He named his creation, Pico de Gallo, and spicy sauce it is! Pico de Gallo comes with a booming sound system and a rooftop stage. 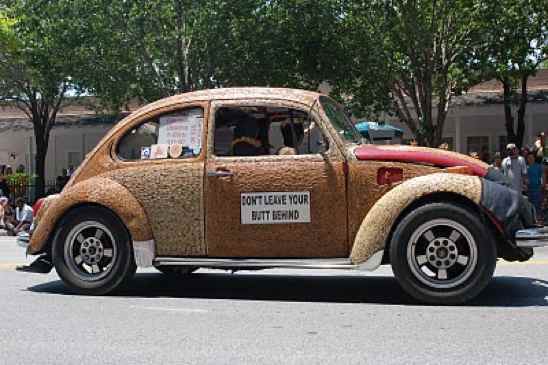 When you care enough to send a public message, don’t hold back.

Carolyn Stapleton of Orlando, Florida did just that.

She created Stink Bug by covering her VW Bug in used cigarettes. The car serves as an antismoking message and an anti-littering message too. 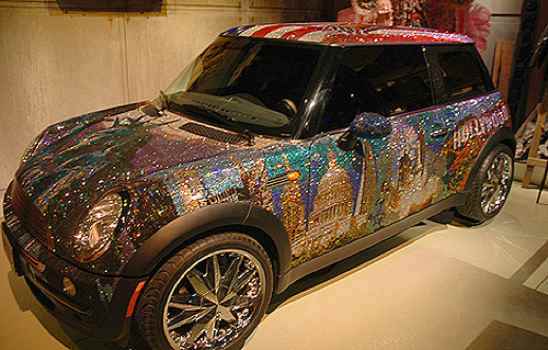 Brought to us by the same family that glued coins to a bunch of cars, Ken Burkitt and his wife Annie, they covered this 2004 Mini Cooper in crystals.

These aren’t any crystals, but Swarovski crystals. The crystals make images of icons like the White House and the Statue of Liberty.