Pictured below is Henry and Edsel Ford with the 1896 Quadracycle and the 15 millionth Ford vehicle. 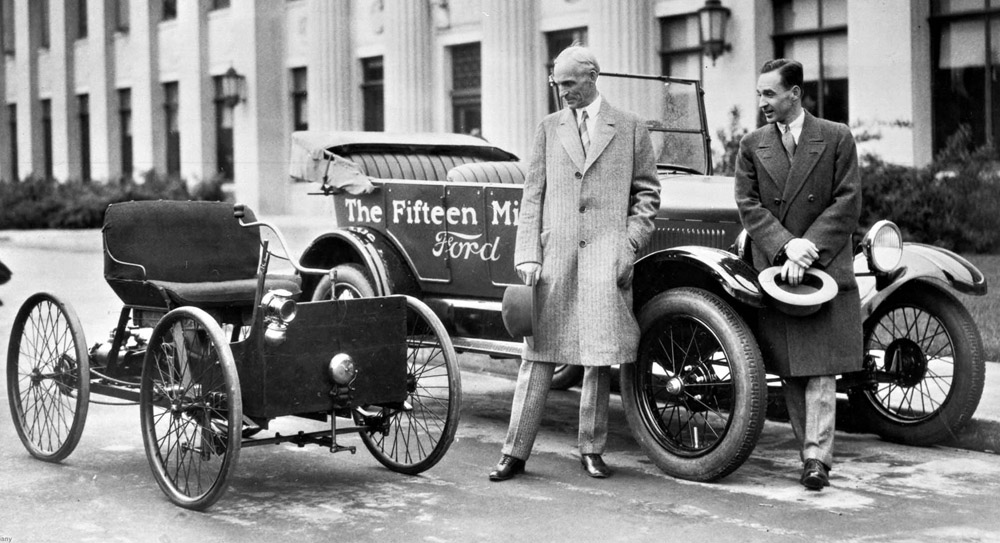 Henry Ford’s is a pioneer of the American auto industry. Born in 1863, he would found the Ford Motor Company in 1903 at the age of 40. Historians credit him with developing the assembly line mode of production, a method he first implemented at the Ford Motor Company. This production method was said to revolutionize manufacturing in not only the automobile business but across all manufacturing industries. Although most known for this assembly line and his invention of the Ford Model T, it was well before these milestones that his career began.  His career in automobiles stemmed from an experiment in his at home workshop. At age 32, he set out to design and build a “horseless” carriage. It was there that he would create his first automobile. Check out the video of Henry Ford and his wife Clara, taking his first vehicle for a spine. He called it, The Quadricycle.

Thomas Edison would be the one who encouraged Henry Ford to further develop the Quadricyle. Edison was impressed by Henry Ford’s mobile and it was him who pushed Ford to create the second model. He went on to do so and as we know, he continued on to create many more vehicles. The Ford Motor Company is still alive and thriving. 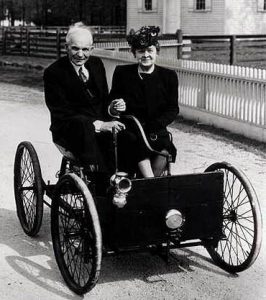 Pictured is Henry Ford and his wife Clara on a ceremonial ride in the Quardicycle. The photo was taken on the 50th anniversary of the Quardicycle first being built.