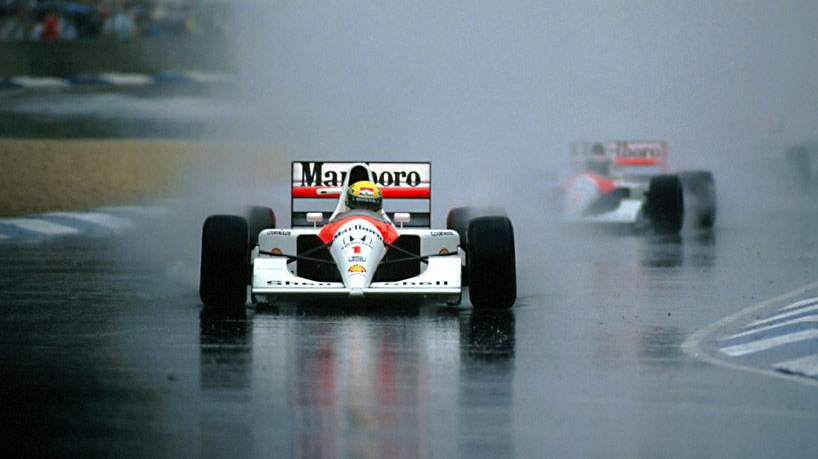 On November 3, 1991, on the streets of Adelaide, Australia, the shortest Formula One race lasted 16 laps, but only 14 of those laps would count. Officials planned 81 laps, but wet conditions prevented them from completing the race. Formula One cars in wet conditions operate like slaloming on petroleum jelly.

The winner was no slouch, but it’s hard to consider anyone a winner when the whole day felt like such a loss. From the fans who showed up only to leave disappointed to the vendors who lost money, and the teams that felt they hardly had a chance, it was more losing than winning.

Everyone lost. Even Ayrton Senna, the man who took first, lost the chance to really race.

The 1991 Australian Grand Prix went down in history as Formula One’s shortest races, but (if there’s a win) it also went down as the organization’s wisest decision. 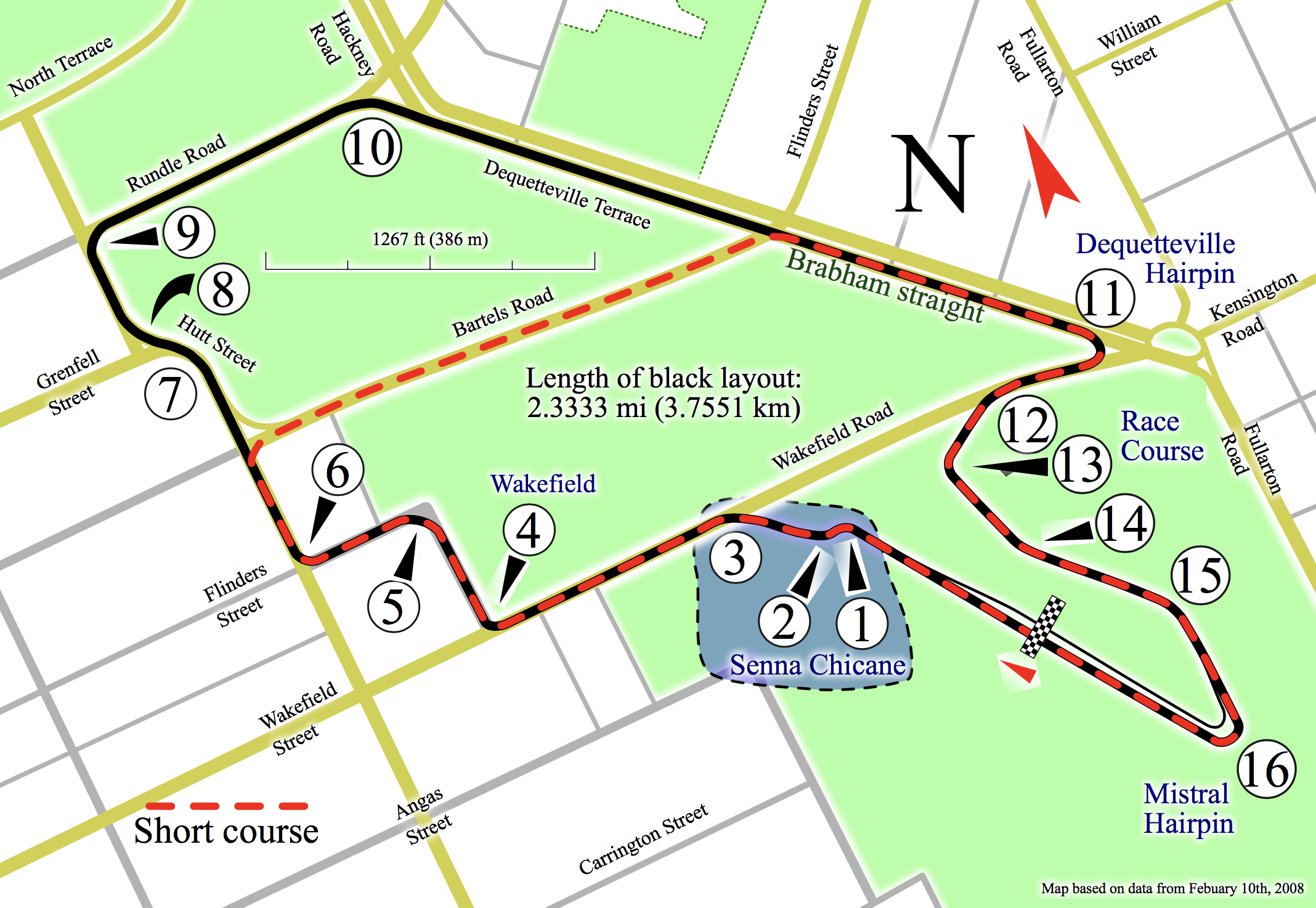 The track where the Australian Grand Prix used to take place was the Adelaide Street Circuit, a temporary street circuit right next to the business district of Adelaide.

That 2.349 miles track served Grand Prix events from 1985 to 1995. Australia also used the track for racing V8 Supercars, but they had a shorter route for those races.

The first time they hosted a wet Grand Prix race on the track was the ’89 race. Starting in ’96, Australia moved the Grand Prix to the more venerable Melbourne Grand Prix Circuit. 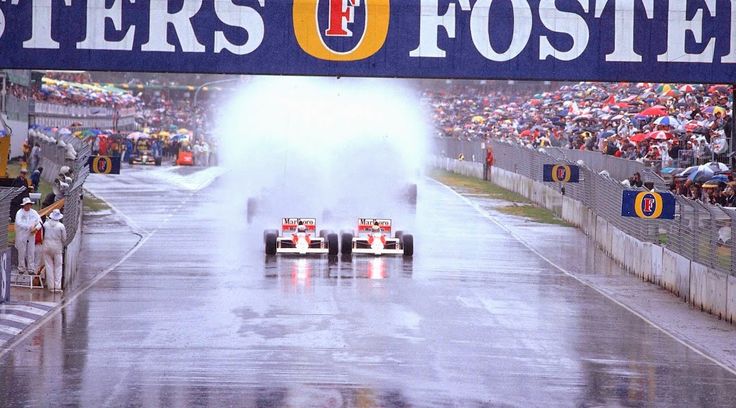 When the cars lined up for the 1991 Aussie Grand Prix, it had only been 24 months since similar conditions threatened the exact same race; the ’89 Australian Grand Prix.

One driver, world champion Alain Prost, pulled out after one lap due to the conditions. Many drivers would later remark they wished they’d followed him.

The thing was, event organizers and the drivers had anticipated the race would be a wet one. Forecasts had predicted the rain to come and stay.

Despite drivers calls for a postponement, officials pushed through with the race. On the first lap, one driver spun off on turn 4. Against further protest, they restarted the race without Prost, urging the other drivers to drive more slowly.

On the restart, one driver stalled before the grid. Lap by lap, cars retired, spun out, and collided. After 70 laps of an 81 lap race, the officials ended the race. 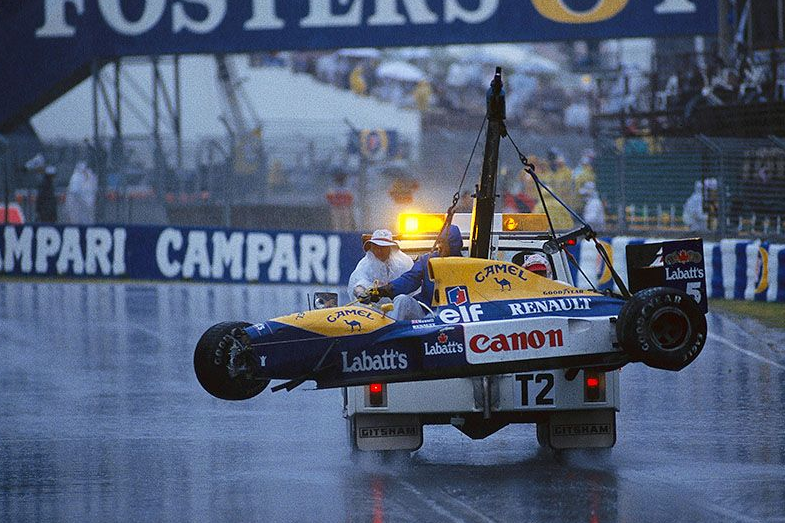 Alain Prost did not race in the ’91 Grand Prix in Adelaide, but his nemesis, Brazilian driver Ayrton Senna did. Senna slid into the pocket left by Prost in ’89 and nearly won the race.

He wrecked in that race, from taking too many risks in the wet conditions. The ’91 race would be Senna’s 60th. He’d gained some wisdom since ’89; he wouldn’t take the same chances he took then.

“It was a mistake for all of us to start,” Motorsport Magazine quoted him admitting after the ’91 race. “In fact, I only started because there was a lot at stake and the team has done so much for me over the past four years.”

On the track, the flooding was so great, cars simply couldn’t drive in a straight line. They would drift left to right on the straightaways, their tires searching for something to grip.

Immediately cars spun out and traded paint. Marshals waved yellow flags, then the red ones.

They were to have completed 81 laps, as they always did on that track, but after 16 agonizing laps, officials stopped the race. They made the official cut off the 14th lap.

The 1991 Grand Prix in Australia was a disaster, one the officials in Formula One and Australia intend not to repeat. For the fans who suffered in the rain to see their heroes battle, it was all awash.

Thankfully, nobody died or suffered serious injury. Call that a win.