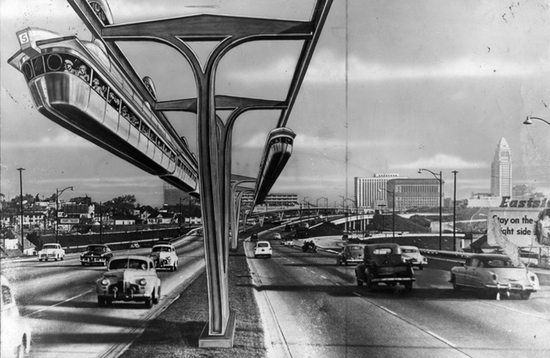 In 2017, the Mayor of Los Angeles suggested a nifty solution to the city’s notorious 405 parking lot. Los Angeles could suspend a lovely monorail over the 405. Problem solved.

It’s not a new idea, though.

In case you’re not familiar with the town of L.A., the 405 Freeway is only one of many problematic roadways, but one with a particularly nefarious reputation for bottlenecks. It cuts through a narrow pass, called the Sepulveda pass, where all the years of blasting the pass wider have always been lanes behind the sprawling town.

Way back in 1954, on January 15, a proposal hit the desk of the Metropolitan Transit Authority based on research going back to 1947. The Cloverdale & Colitis (C&C) company would construct a $165-million monorail to solve L.A. traffic congestion.

The Monorail would stretch the length of today’s Metro Red Line in Los Angeles, from the San Fernando Valley to the port of Long Beach. Hate to spoil the ending, but it never happened.

The problems facing C&C are the same one facing anyone with designs on creating an LA monorail today. There are too many evil forces against it, and no I don’t mean Elon Musk. 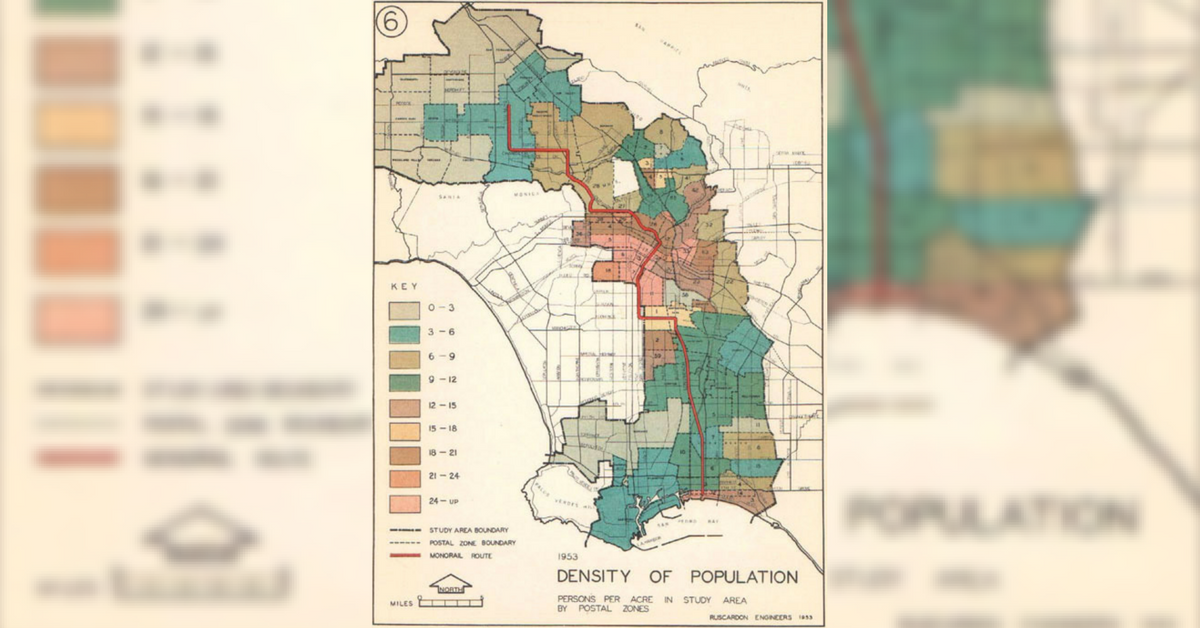 They called it “a proper beginning of mass rapid transit throughout Los Angeles County.” The statement from C&C was bold and somewhat ignorant. Los Angeles had a rail system, but we’ll come back to that.

In today’s cash, the proposal from C&C would be around $1.5-billion. That’s not bad considering Los Angeles paid $4.5-billion to complete the existing Red Line back in the ’90s.

C&C’s monorail would have started north of the existing Red Line, in Panorama City in the Valley. There were to be fifteen stations, each with parking lots. Traveling one end to the other would take travelers a little over an hour.

Operation of the train, suspended on a track, with only rubber tires connecting the train to the track, they would have run near-silently. One train car could have carried 67 passengers, which is light, but they could put eight together in one train, allowing over 500 people to glide over the LA traffic at a time.

The Problems With Monorails 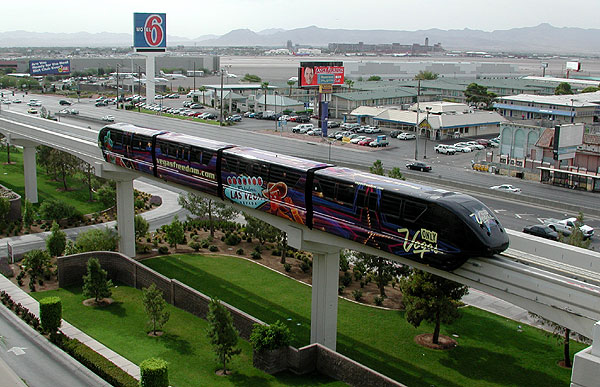 Monorails sound in theory like a good solution. A suspended rail wouldn’t require a large footprint as all the action is up in the air.

That’s where the problems start. Forget the unsightliness of power lines, imagine a train in the air. Imagine stations. It wouldn’t matter how quiet it ran.

As Neal Broverman of Los Angeles Magazine pointed out, we have recent examples of this not working, like Las Vegas.

“The stops are not located on the Strip because of their cumbersome nature and enormous visual impact,” argues Broverman. “Officials didn’t want the trains blocking the billboards and architecture of the Strip.”

And L.A. has plenty of billboards. 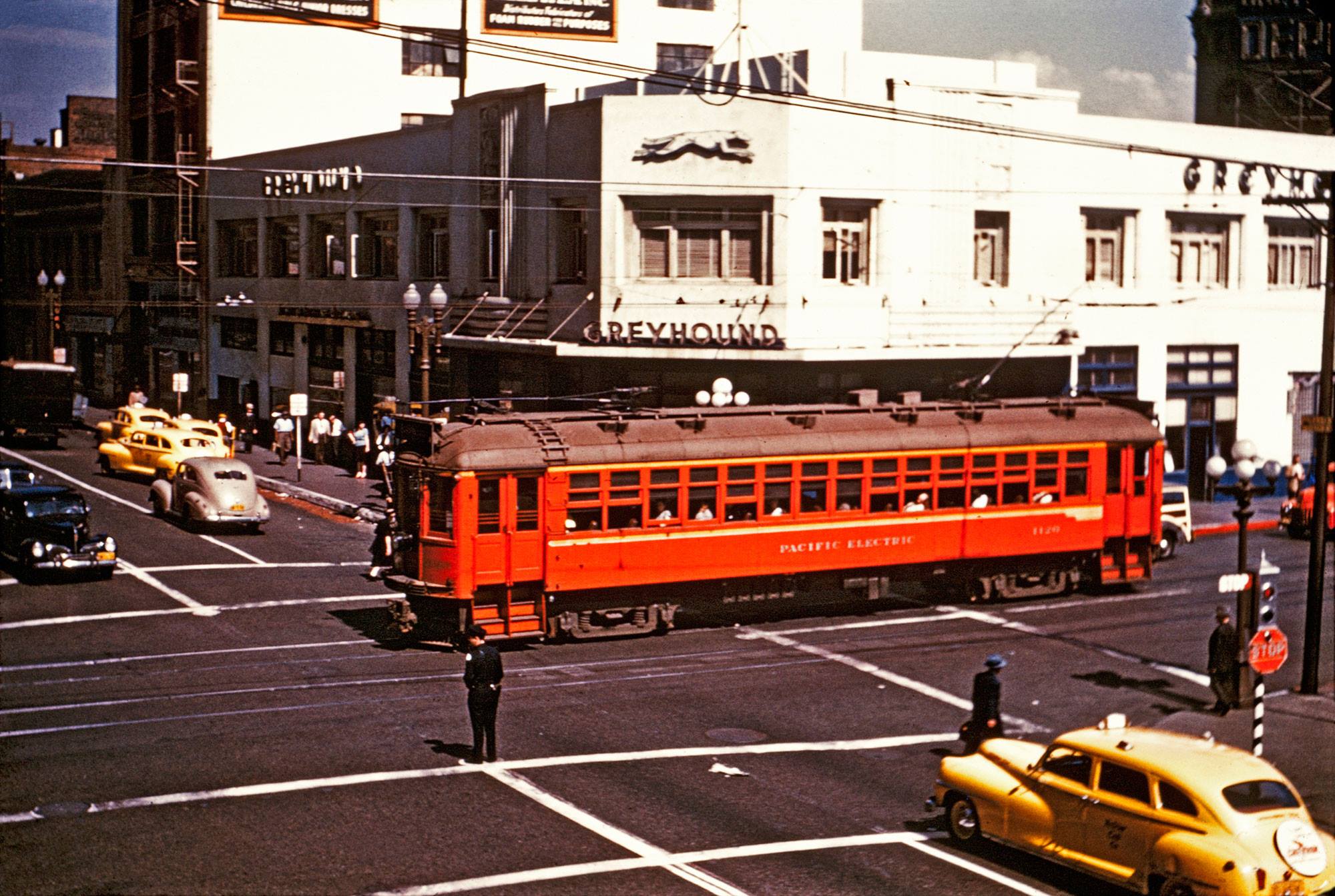 The matter in Los Angeles today is as it was in 1954. Back then, the C&C proposal was not up against logic, but powerful forces in Los Angeles.

At the time, L.A. had a transit system, one of the most extensive in the world the Pacific Electric Lines, sometimes referred to as the Red Cars. They went everywhere, and once upon a time, they enjoyed a solid ridership.

Even harder to overcome, most residents preferred driving. Like today, Angelenos of the fifties preferred to fight traffic under the auspices of the freedom-by-car, than climb into a stinky bur or train.

More so then than now, nobody believed Angelenos would adopt a new form of mass-transportation when they were using the existing one less and less. The big reason the owners of the Red Lines opposed the monorail had as much to do with their own declining numbers as anything.

One of the most notable proponents for the monorail was Ray Bradbury, the futurist. He made his home in Los Angeles and never drove.

He lobbied universities and anyone who would listen to him. But he would have to join C&C and Mayor Garcetti in the meh-maybe bin.

The only monorail in Los Angeles run up a hill at the Getty Museum. 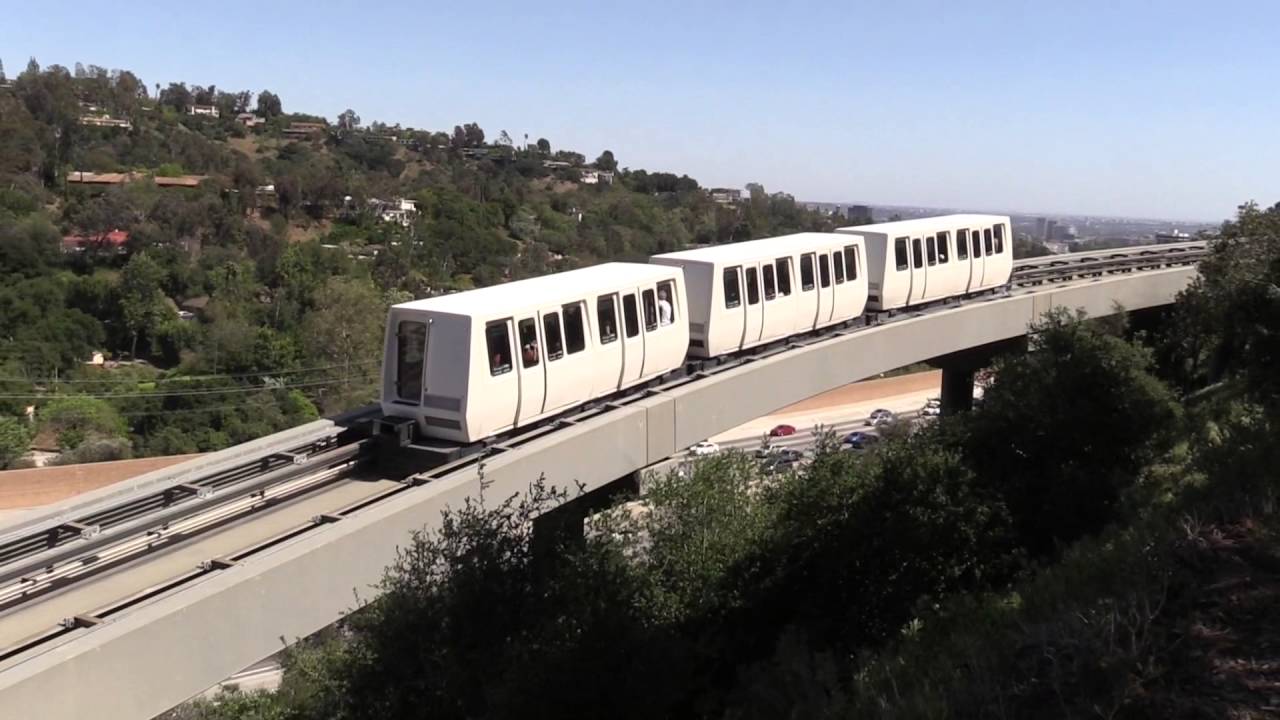