While van customizations are as old as the conversion van, nobody does it like the Japanese, and for a good reason.

In the last couple of decades, the van modding culture of Japan has gone off the deep end of extravagance. The people of the U.S. might like to think they have the market on big cornered (looking at you, Texas) but the Japanese prove otherwise with their zany vanning skills.

What started as these things often do, an innocent exploration, an adaption of art (in this case modding) has blossomed into something special. There are no words to describe it. One must witness the insanity firsthand to get it.

By the end of this blog, you will agree. The Japanese van better than anyone else in the world, period. 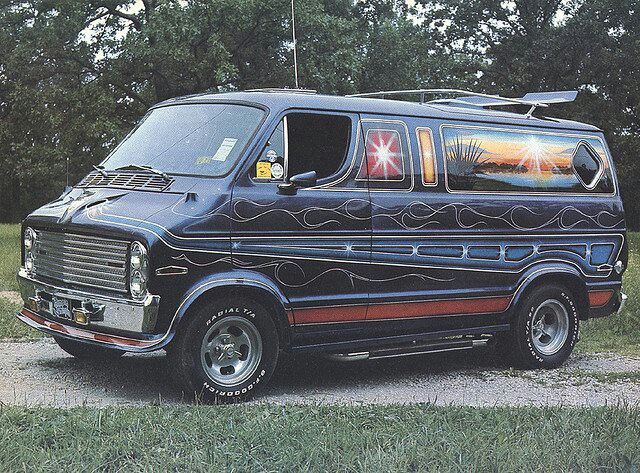 It seems like the van belongs to the United States, like the hot rod or the Harley Davidson. For the record, none of those are exclusive the U.S. anymore. The world owns them all now.

Once upon a time, it was the Americans who converted vans into something plush. In the 1980s and even the 90s somewhat, folks in the nifty fifty bought up GM vans for conversion into roving family vehicles.

Common elements were shag carpeting, booming sound systems, televisions (before the existence of flat panel screens), cots or full-size beds (if not seats designed to swivel), and plenty of cup holders.

These were the brainchildren of aging hot-rodders who had kids and needed a project. Tooling away the weekend on a van for the family was more acceptable than building a rod for racing.

The problem for these vans was the reliability after a few years. They broke down. Also, there was the rise of the SUV. Once cars came standard with all those fancy mods, why waste the weekend laying down shag carpeting?

In the ‘90s we had memos, not tweets; Japan never received the memo. 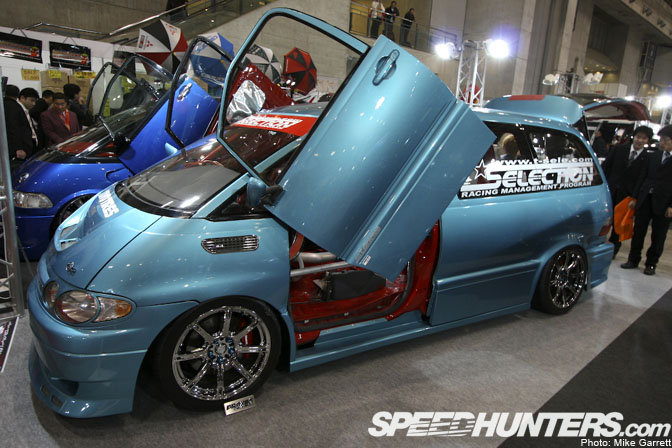 For those who survived the 90s, a few know about the art of Bōsōzoku.

This was the Japanese art of tricking out otherwise normal street bikes with aftermarket handlebars, huge mufflers, and super-tall passenger seats.

Only a visual will do this justice. Consider yourself warned… 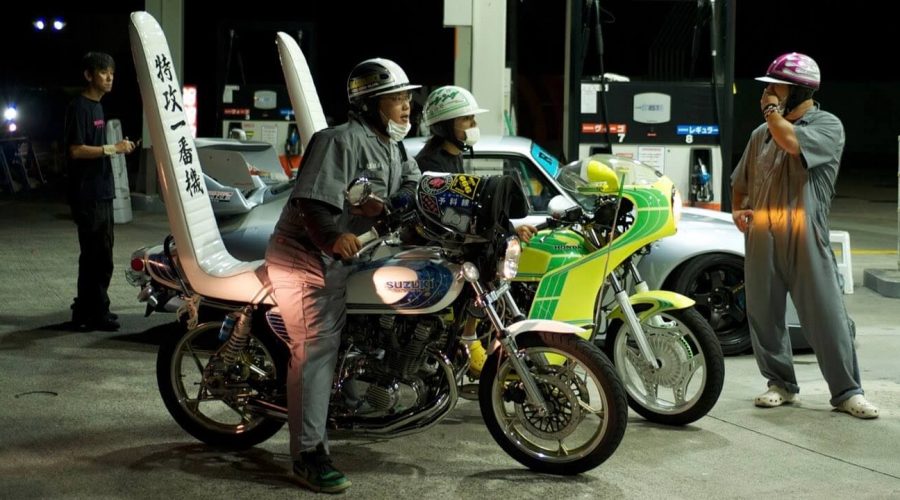 One can still see these bikes around Japan. It was, perhaps, the aging crowd of Bōsōzoku fanatics who turned their attention to vans, just like the modders in the U.S., except with much, much, much… different results.

Tracking back in time, one can see the first evidence of the Japanese van modders popping up around 2008.

At that time, van mods looked about the same as the mods one sees applied to import cars in most places, chrome upgraded, switchblade doors, custom paints, that sort of thing.

Then, something went off the rails. 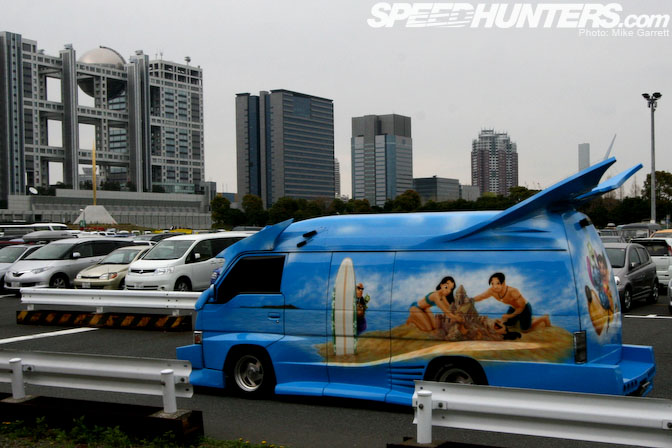 Within a couple of years, the Japanese modifications went from flashy to fantasy. Most of these vans couldn’t drive on the open road. They were way beyond a little chrome and pain.

These are fully-loaded, lowrider, with massive ground effects, spoilers borrowed from anime, and lighting effects which make Disney’s July 4th fireworks look like a match strike.

We must pause to review a set of examples. Again, you’ve been warned… 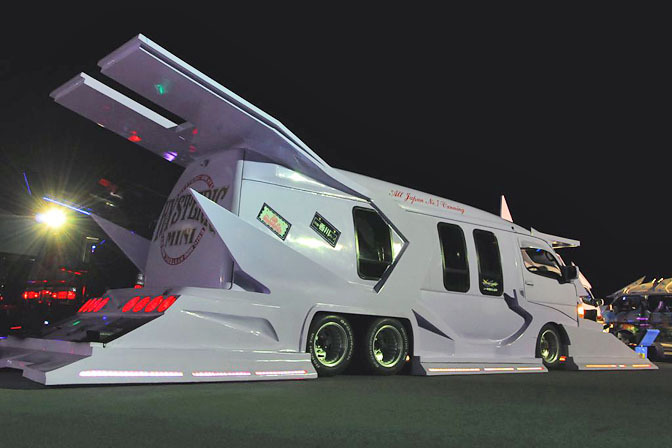 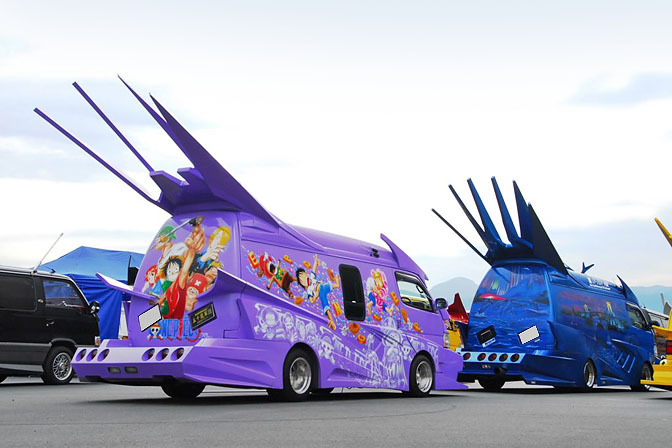 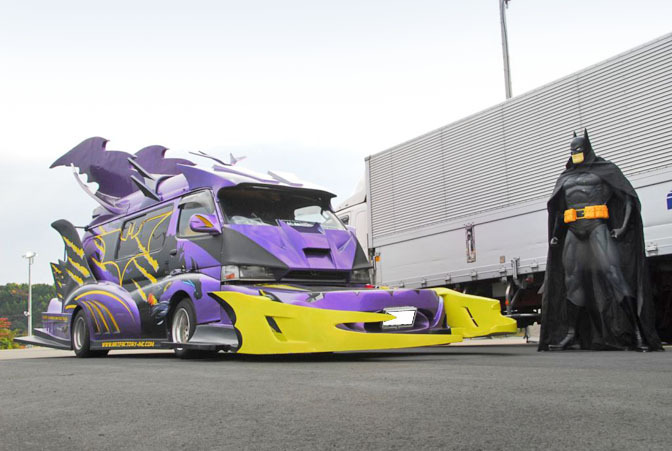 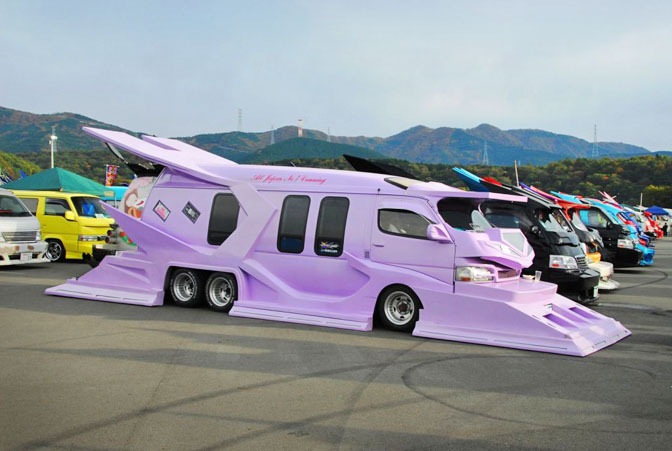 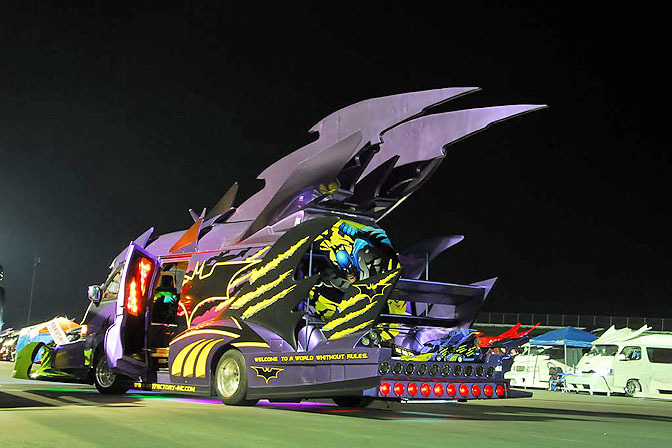 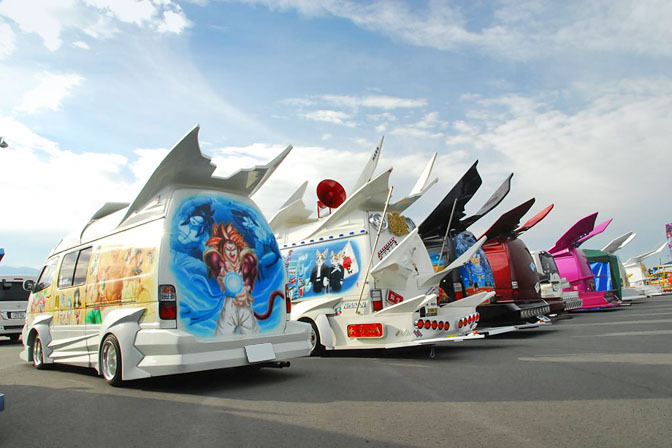 Considering the population and available space of urban areas in Japan, these van owners are either wealthy, crazy or from the country. The truth is all three. Those vans are driving parties.

For this writer, Japan jumped up past Ireland and that silly Blarney stone after discovering this craziness. That stone has been there forever. Who knows how long these vans will be around…