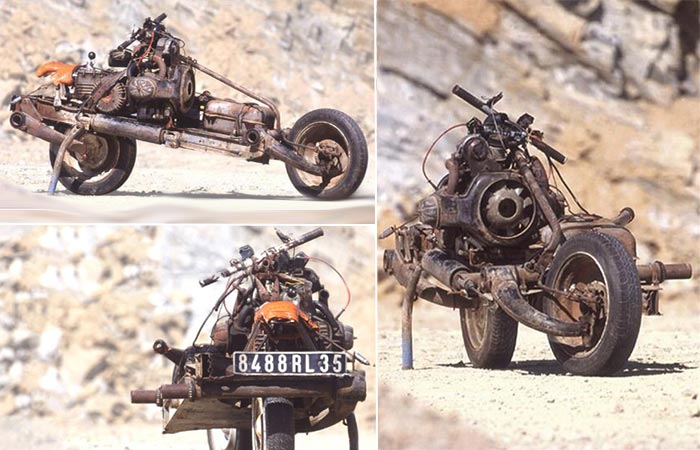 When Emile Leray’s Citroen 2CV broke down in the Sahara Desert in 1993, he tore the car apart and built a motorcycle from the parts to escape dying from the elements. It worked.

That was 25 years ago. Leray gets the MacGyver Award for that year, and every year thereafter, as nobody has done something quite so badass since then, except in movies.

This is a true and factual story…

As Emile Leray wiped the sweat from his brow in the Sahara heat, he knew the clock was running out. It had been 12 days of labor trying to make his own motorcycle without parts.

When he started this project, he thought it would take three days at best. He also thought he had about ten days of water.

The last of it his water reflected light in his eyes, a reminder that he’d better have success soon or someone would come upon a strange sight finding his corpse next to this mess.

He should have never left Tan Tan in the first place. Now he just wanted to get back. Thank god he didn’t pick up that dude looking for a ride. 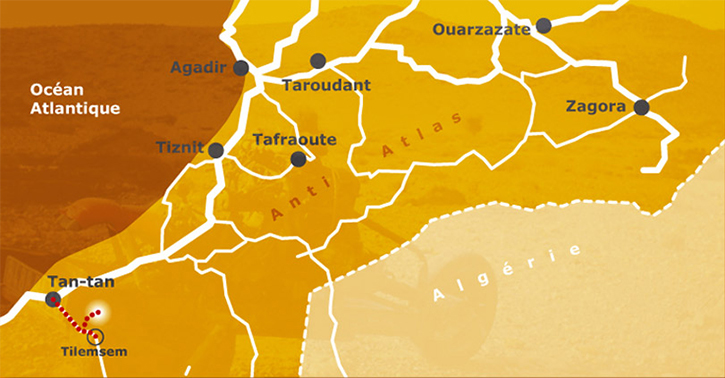 Leray was a French electrician who was no stranger to the desert outside Morocco.

When he left Tan Tan that fateful day in 1993, he headed straight into a military outpost with no intention of stopping, but the Royal Gendarmerie, A.K.A. the Moroccan military police, had bad news.

There had been an upscaling of conflict between Morocco and Western Sahara down the road. He would have to backtrack to Tan Tan.

Before he could leave, they asked him to take someone with him but declined, citing insurance reasons, speeding off into the desert. He would get around this blockade by going off road. 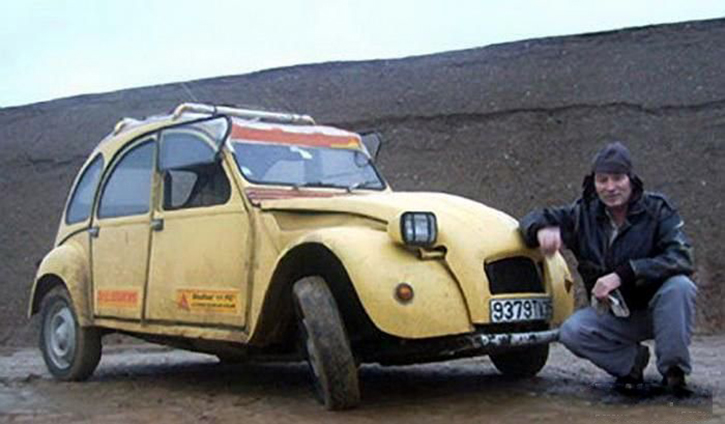 The Citroen 2CV is a capable vehicle, but Leray pushed it to the limits that day. Once he was out of sight from the outpost, he went off-road, flooring it to ensure he wasn’t followed.

“I decided to do it in a 2CV because, although it is not a 4×4, it is tough,” he told the Daily Mail. “In Africa, they call it the ‘Steel Camel’ because it goes everywhere, provided you drive it gently.”

The terrain was full of rocks. After pounding around the desert long enough, the 2CV died in the middle of nowhere, stranding him who knows how far from anything.

“I obviously was too rough because I broke it,” he said in the same article.

Upon inspection, Leray discovered that he’d broken the axle and one swingarm, parts he couldn’t fix in the desert. He also couldn’t drive the car without them in working order.

He knew he was too far from civilization to hike it, and with only about ten days of supplies, he needed a solution fast. Nobody would come looking for him. This was not a route as such, so nobody would stumble upon him either. 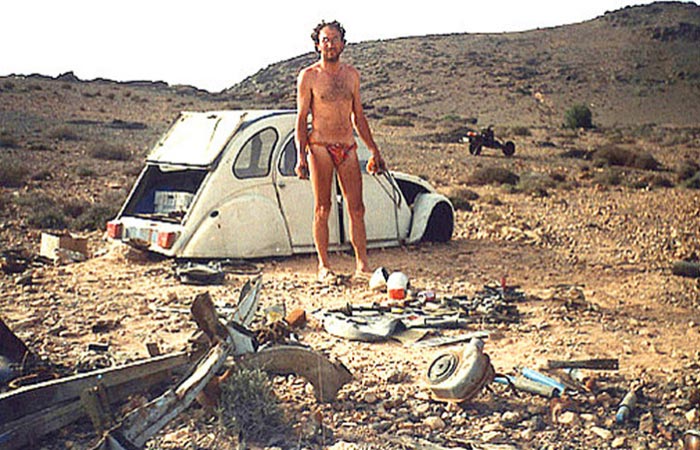 Leray in his camp | jebiga.com

After sleeping on it one night, he woke up early the next day with a plan. It started with him removing the shell of the car. This would be his temporary home while he worked on his escape bike.

“I could not have gone back on foot — it was too far,” he said. “I put myself in what one calls survival mode. I ate less; I monitored my supplies of water and of food to make them last as long as possible.”

He made sleeves from his socks, then set about removing parts from the 2CV without proper tools. He would bend parts, using other scraps of metal and what tools he had for survival.

For thick pieces, he would bend them, drilling holes with metal bits until he could create guides for the screws he salvaged.

Repurposing the wheel arm, attaching it to part of the chassis, and slapping the engine in the middle. Leray even added a seat to his manual transmission desert beast. 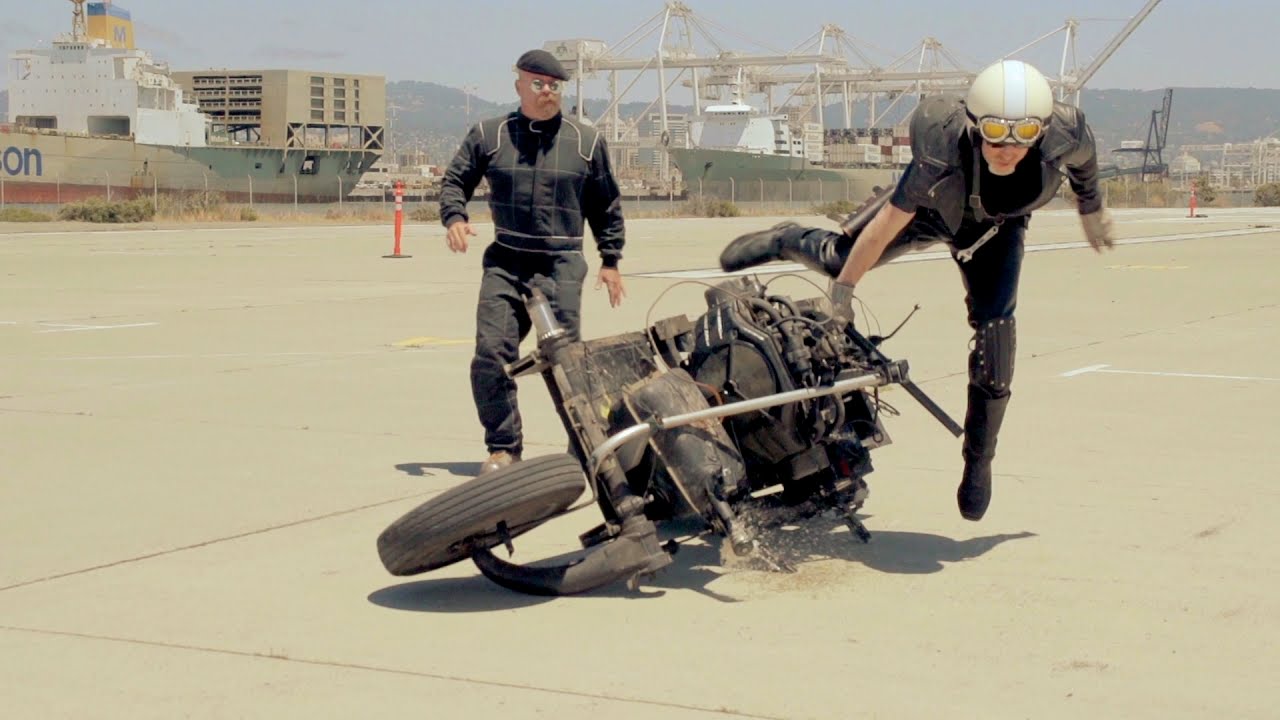 The insanity of this creation couldn’t be better expressed than in the episode of Mythbusters, where they tried to recreate his process.

Without following a manual, the hosts disassembled a 2CV, which they found easy, then set about making their bike. That part was not so easy. They failed twice.

The first, was when they tried to make a better version, requiring two to operate it. Fail.

Then, they tried to recreate Leray’s machine from the images they’d seen. They couldn’t balance it long enough to save their lives. Fail again.

Considering the boys had two good brains, intelligent, experienced, and endless time to make something, they failed two-times-twice.

When finished, Emile Leray called his creation the Desert Camel. He barely had enough water left to make it back to civilization, but he’d done it. The bike was operational.

As he neared civilization, a cop pulled him over for operating an illegal vehicle.

Imagine the cops face as the story came out of Leray’s mouth. “Sure you did, pal. Step over here please.” 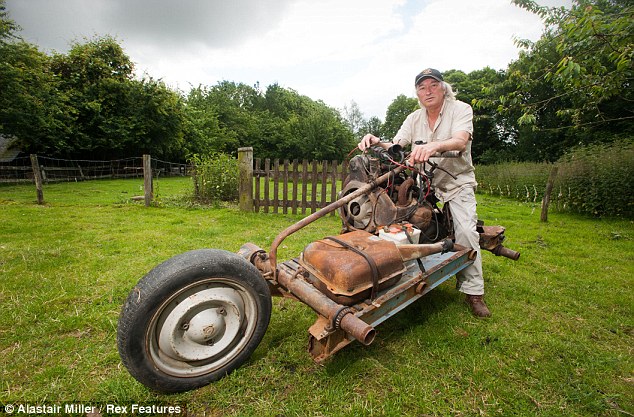 Leray in 2012 on his creation | dailymail.co.uk