It was the early 60s, not yet the decade of grooviness and free love yet, but Goodyear dropped one big toe in the groovy water. They invented light up car tires. Yeah, baby. They lit up, not glowed, but illuminated like a lamp in any color you like.

Considering the culture of tricking out cars, one has to believe these could sell today. Of course, authorities would immediately ban them, but for a shining moment, we’d have light-up tires again.

It all started with a simple polymer called Neothane. 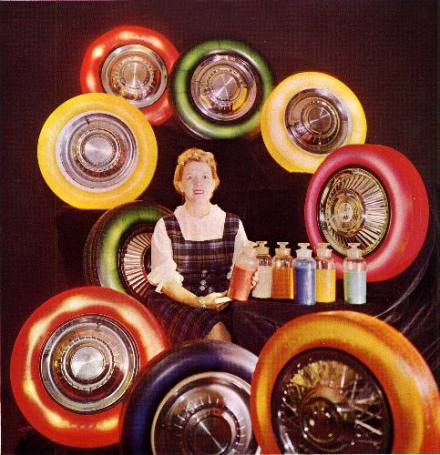 May 7th, 1963: Goodyear trademarked Neothane, which was a fancy name for urethane. The key difference is manufacturers cast Neothane into shapes, like car tires.

Prior to urethane, skateboards and roller skates rode on clay wheels. It was every bit as awful as one can imagine. When someone figured out how to wrap a new polymer around bearings, it gave skating a whole new feel.

Urethane was responsive and grippy, but squishy enough to ride over small rocks. Not only that, urethane came in colors!

That was around the same time the good folks at Goodyear, starting playing with the same material. They branded their specific recipe as Neothane, but it was the same stuff.

At the time, manufacturers were speculating a replacement for rubber. Neothane offered potential benefits black and white rubber could not, but like many inventions, the potentials couldn’t live up to the hype. 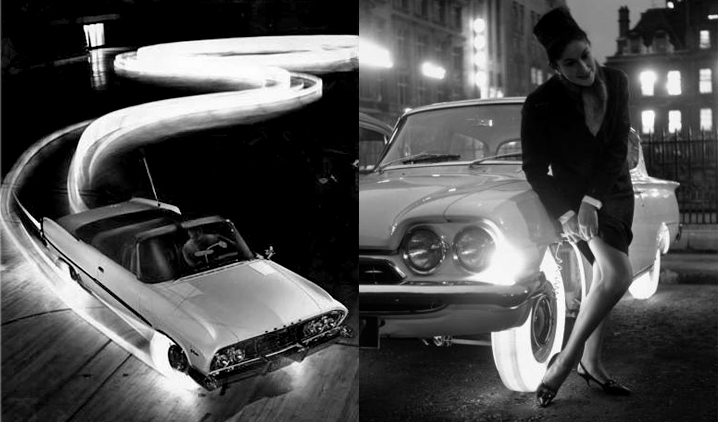 The wheel well of the tire housed 18 tiny bulbs the driver could activate, illuminating the surrounding area with an even wash or flashes of light.

Had the idea worked, it would have been a massive contribution to light pollution or possible a decrease in municipal spending on freeway lights.

It wasn’t only about light up tires. Goodyear imagined a world where tires would match the dress.

The best-slash-worst tidbit about this historic tale one finds in the historic press release about Neothane. It was hardly offensive to women.

“Imagine, if you will, one girl telling another: ‘But, my dear, green tires just don’t do a thing for your complexion.’”

On the practical side, in Goodyear’s cars of the future could sport tires in any color desired. It was to be a revolution in future auto styling. 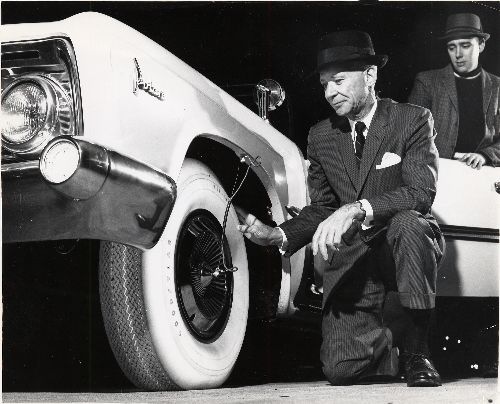 Like most good ideas, what kills them is money. The Neothane tires looked good on paper. They even drove well, until the driver pushed them to perform.

Goodyear molded the tires in specialized molds, then heated them to 250 degrees. The end result was a tire which was built more like a thick mesh net. They were tubeless tires even and performed well up to 65 MPH.

The problems turned up in rain or when braking hard. Any skateboarder can tell you what a hard sideways slide does to urethane wheels. You get a flat spot where it melts.

The tires also had one other negative effect. They were so distracting, other drivers stopped driving or worse, drove through stop lights when they debuted them.

With time Goodyear may have been able to make a hybrid with rubber or improved the Neothane to withstand the heat, but the cost to investigate further was not worth the risk.

We already had tires that had been working fine for decades.

After ten years of development, and countless hours of effort by engineers, Goodyear shelved Neothane tires. They never made it out of the prototype stage.