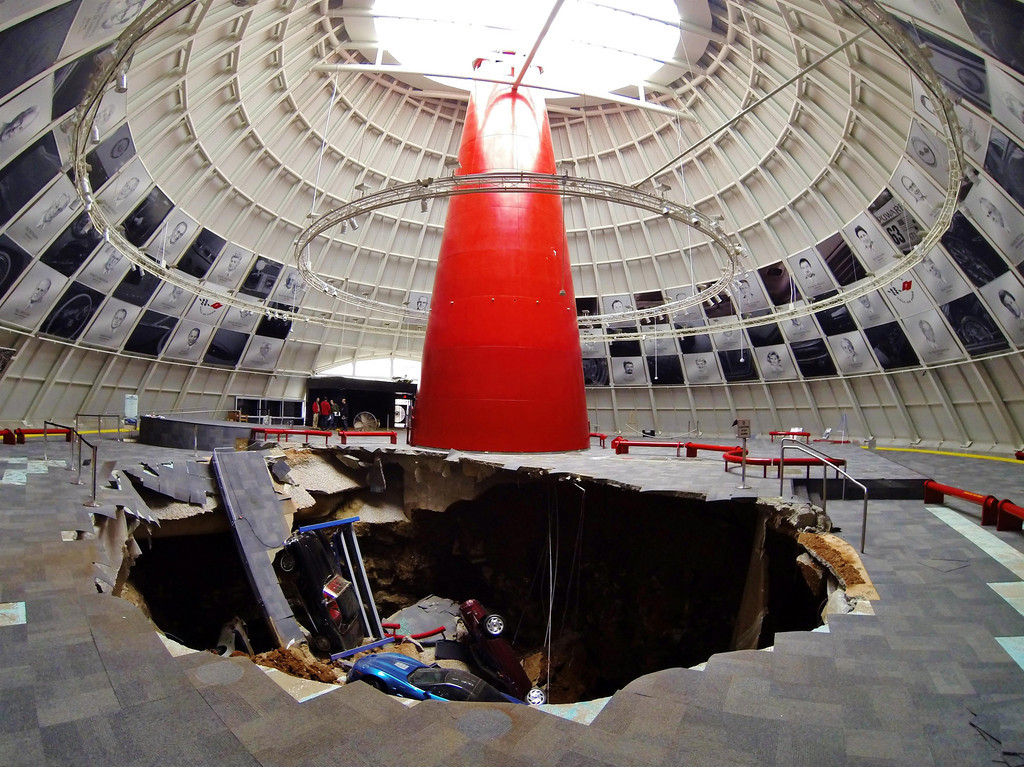 In the early morning hours of February 12, 2014, there was a massive sinkhole forming underneath the National Corvette Museum in Bowling Green, Kentucky. At roughly 5 a.m., the sinkhole started to rear its ugly head, right underneath one of the many exhibits at the museum.

But this particular exhibit happened to hold some of the most cherished Corvettes in the entire collection. 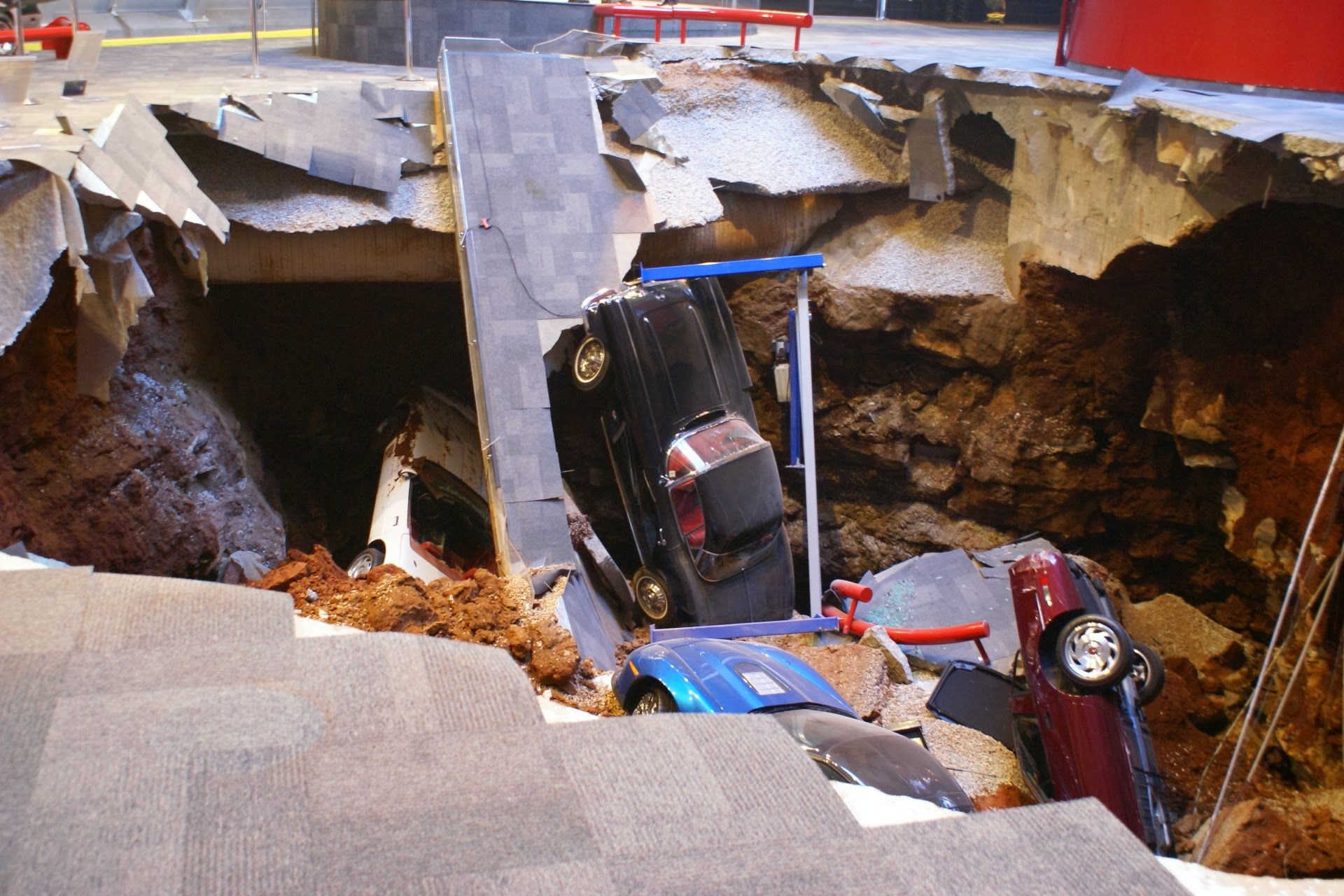 At first, the hole was only big enough for a single car to fit through. But by the time it was finished, there sat a hole that stretched 60 feet long, 30 feet deep and 45 feet wide. Luckily, nobody was there at the time of the sinkhole took place as it was early in the morning. Had it happened during business hours, it’s likely this story wouldn’t be focused on the damaged cars themselves, but rather the people involved. Luckily we get to focus on these eight highly collectible ‘Vettes.

These are the cars that were victims of mother nature’s wrath. 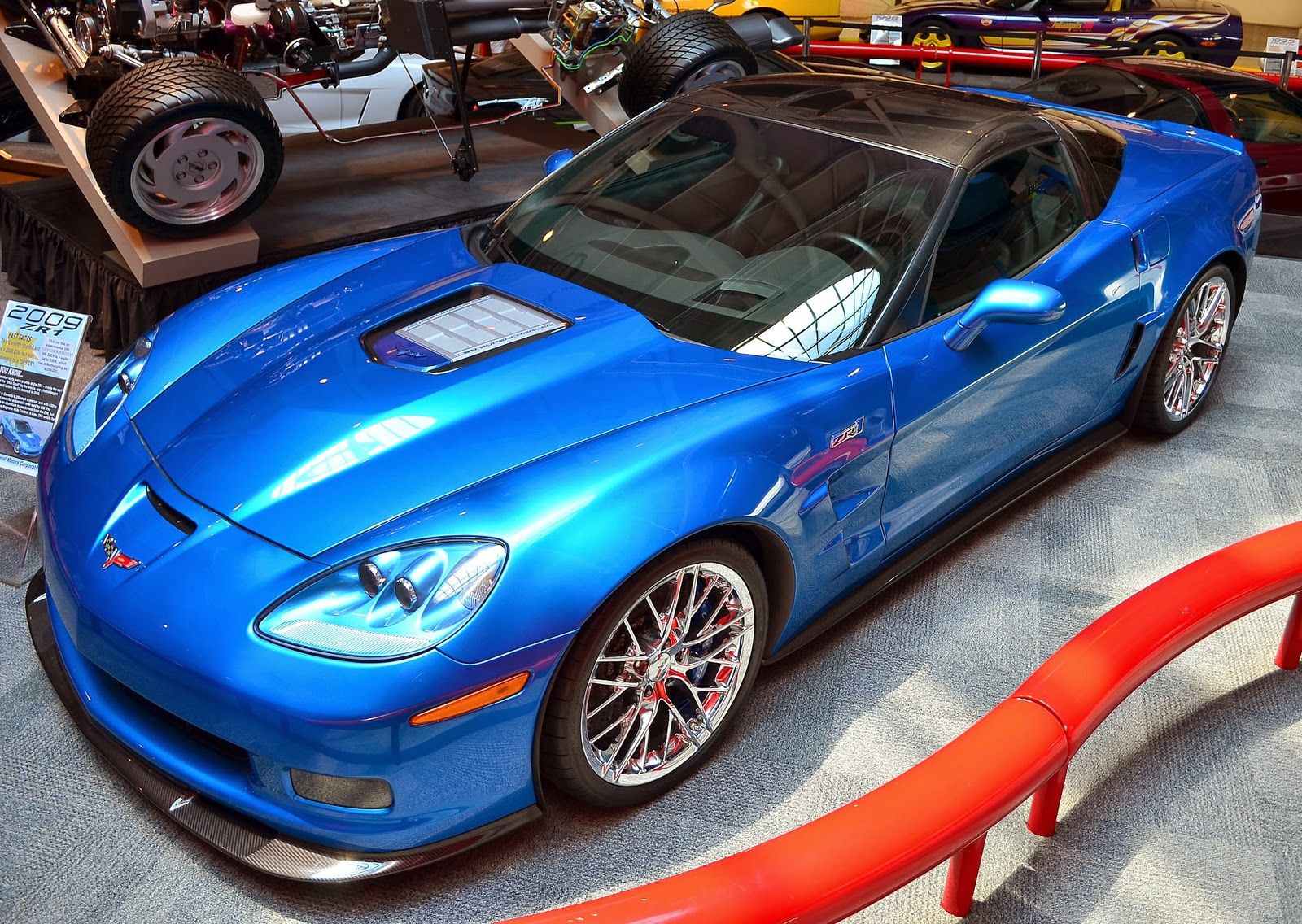 This happens to be one of my personal favorite Corvettes of all time because it featured the supercharged LS9 V8 engine that produced nearly 650hp, making it the most powerful Corvette to date. It was one of the two cars on loan from General Motors that was damaged. 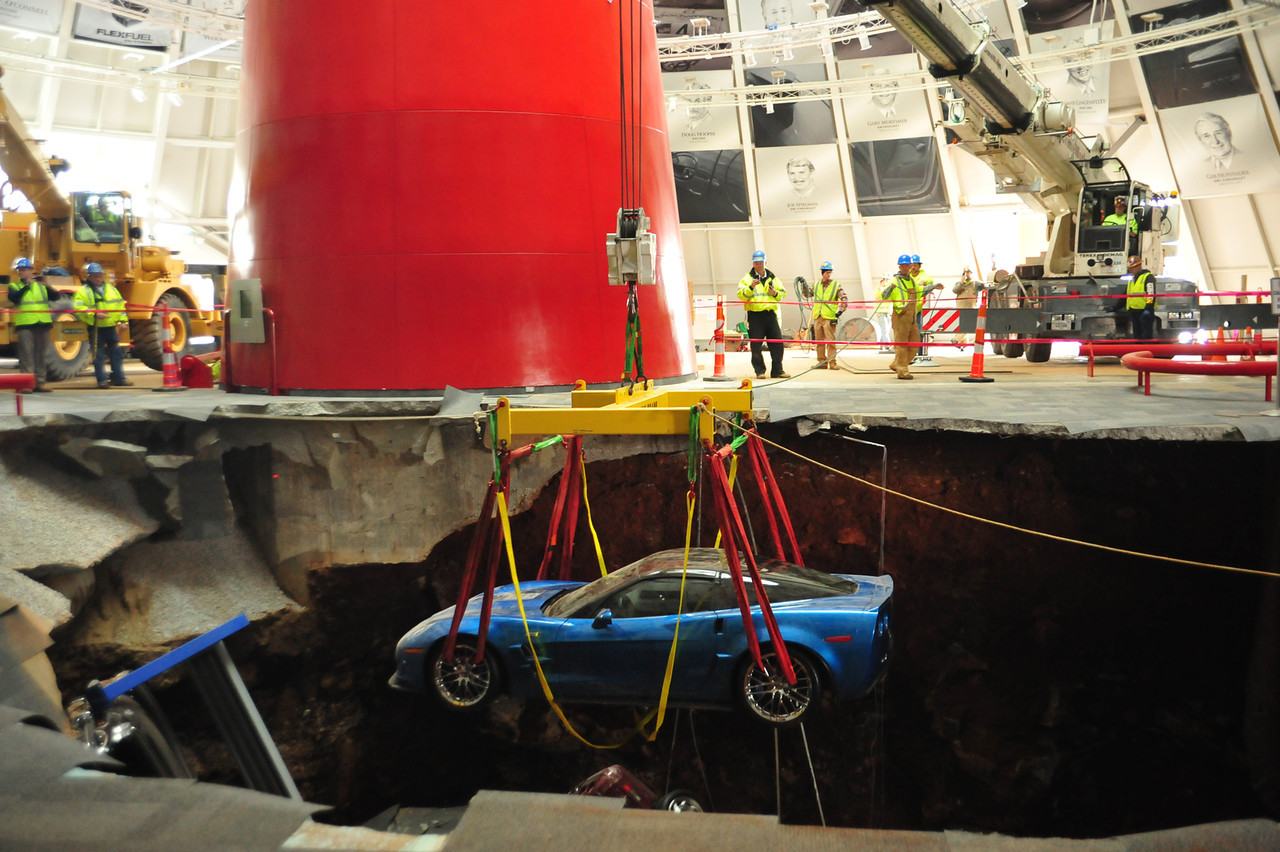 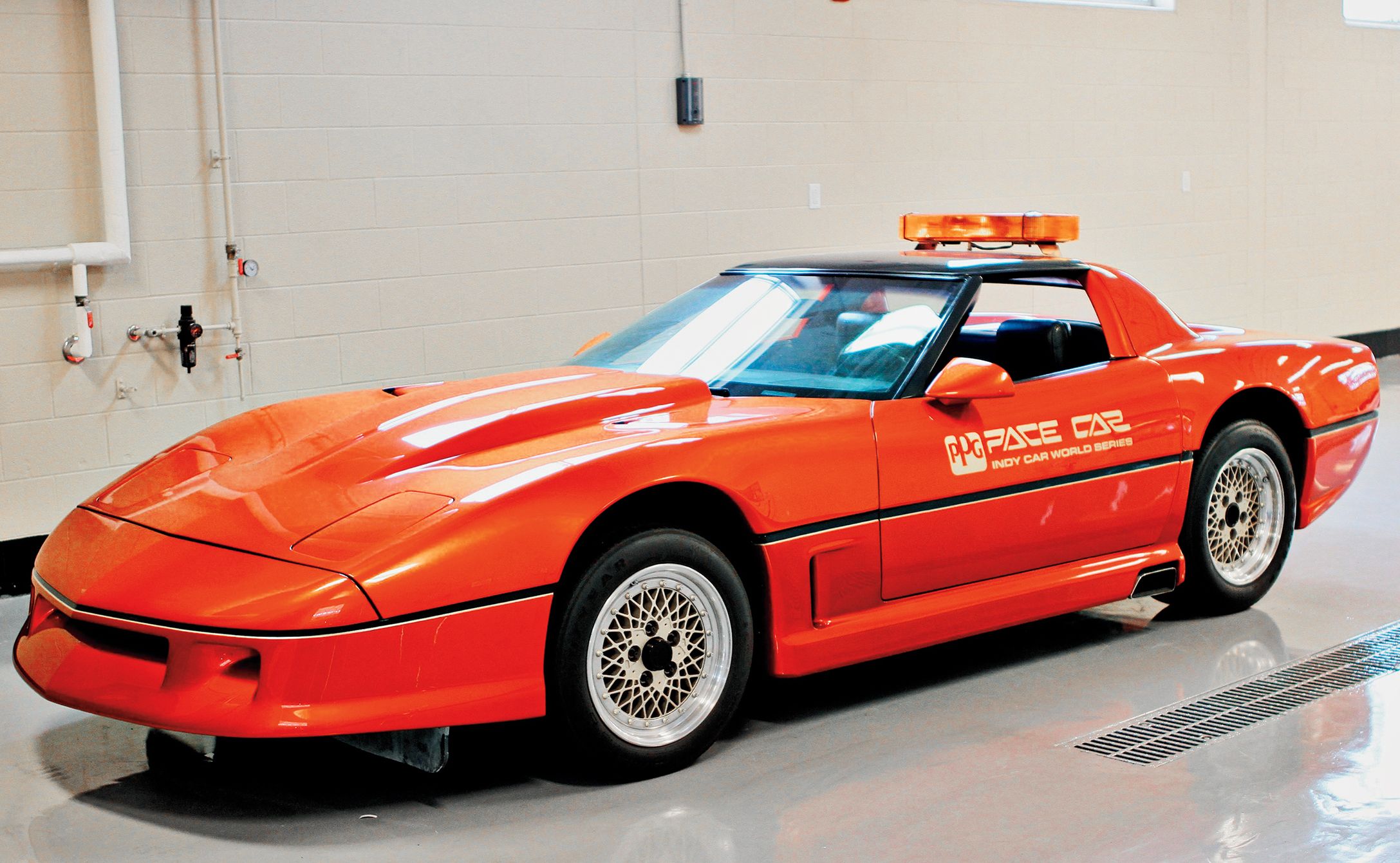 This futuristic looking Corvette was one of the most damaged of all the cars that fell into the hole, and was far beyond repair. It apparently had a massive cement slab nearly cut it in half. It was specially built by designers from both Chevrolet and PPG, and almost the entire car was custom built. The only body panels that were left in stock-form was the roof panel and the doors. 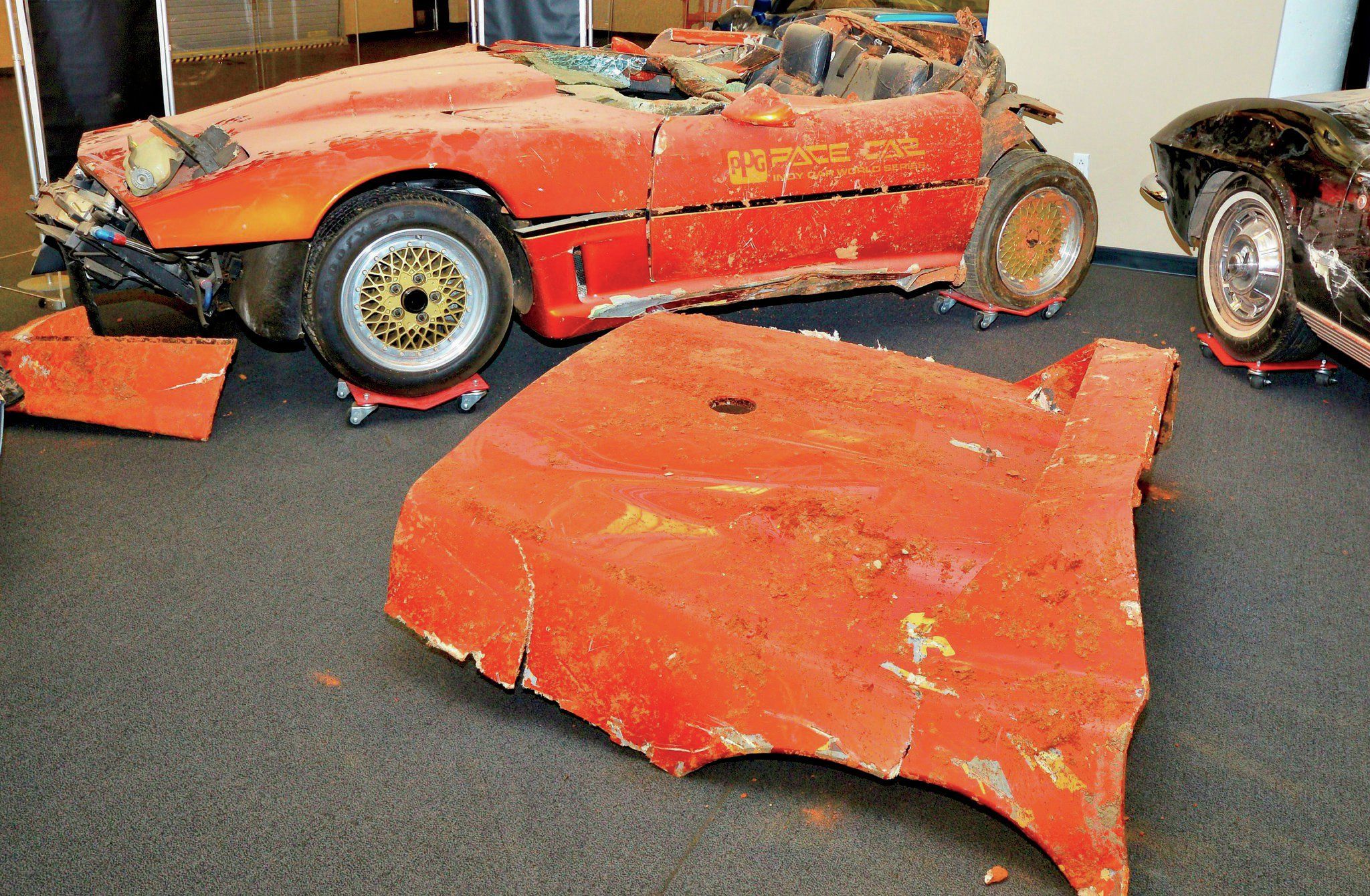 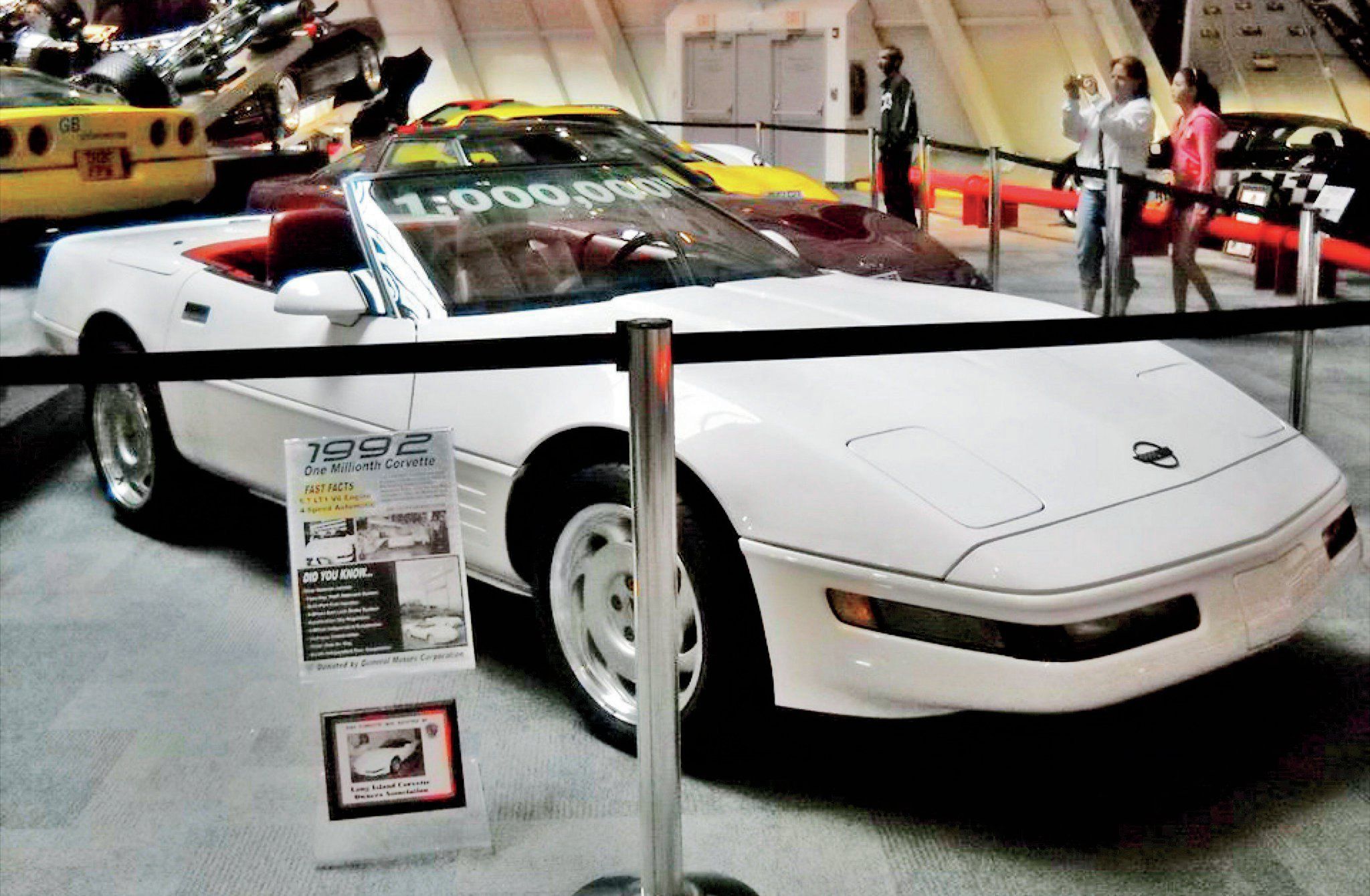 The 1 millionth Corvette came off the assembly line on July 2. 1992, and utilized the same red interior and white exterior color scheme as many other celebratory Corvettes. The 1992 model year saw huge improvements in the performance category. The LT1 engine put out 300hp, which was up 20% from the previous year. This is believed to be the most valuable cars devoured by the sinkhole. 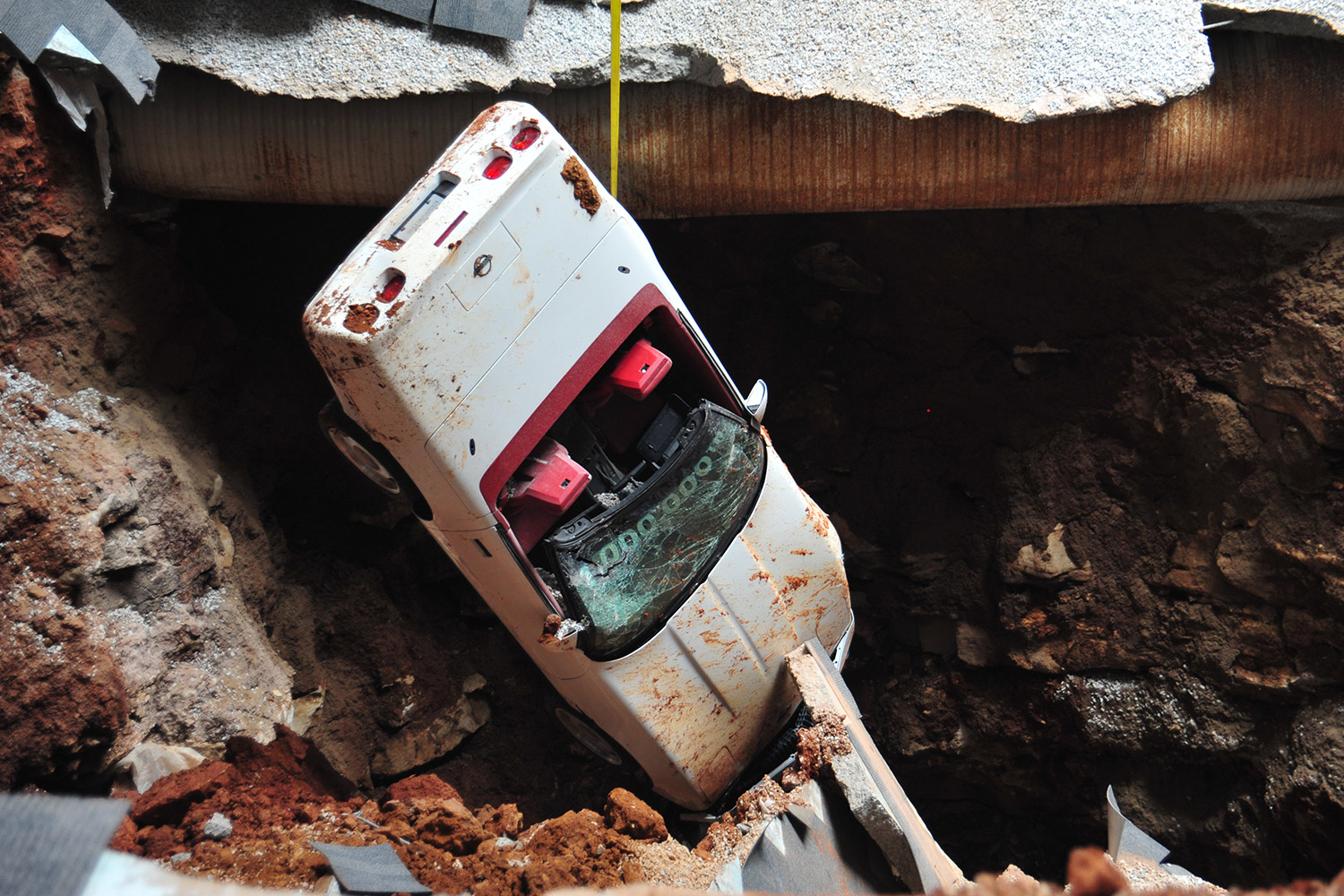 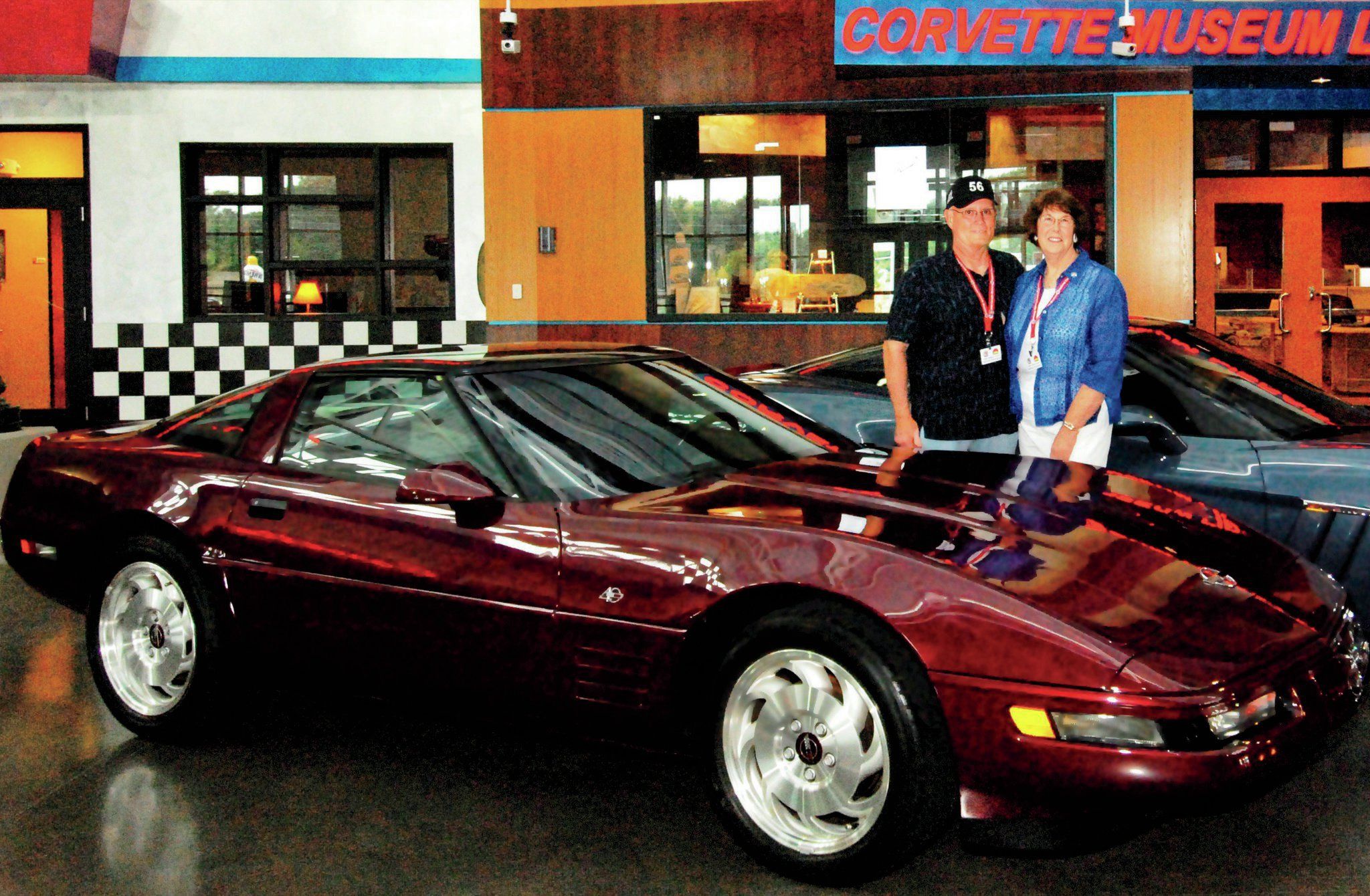 The 40th anniversary ruby red Corvette was also significantly damaged when it landed on top of a pile of debris. It was a limited package offering on the 1993 Corvette that featured a 5.7L V8, producing 305hp as well as many cosmetic enhancements. 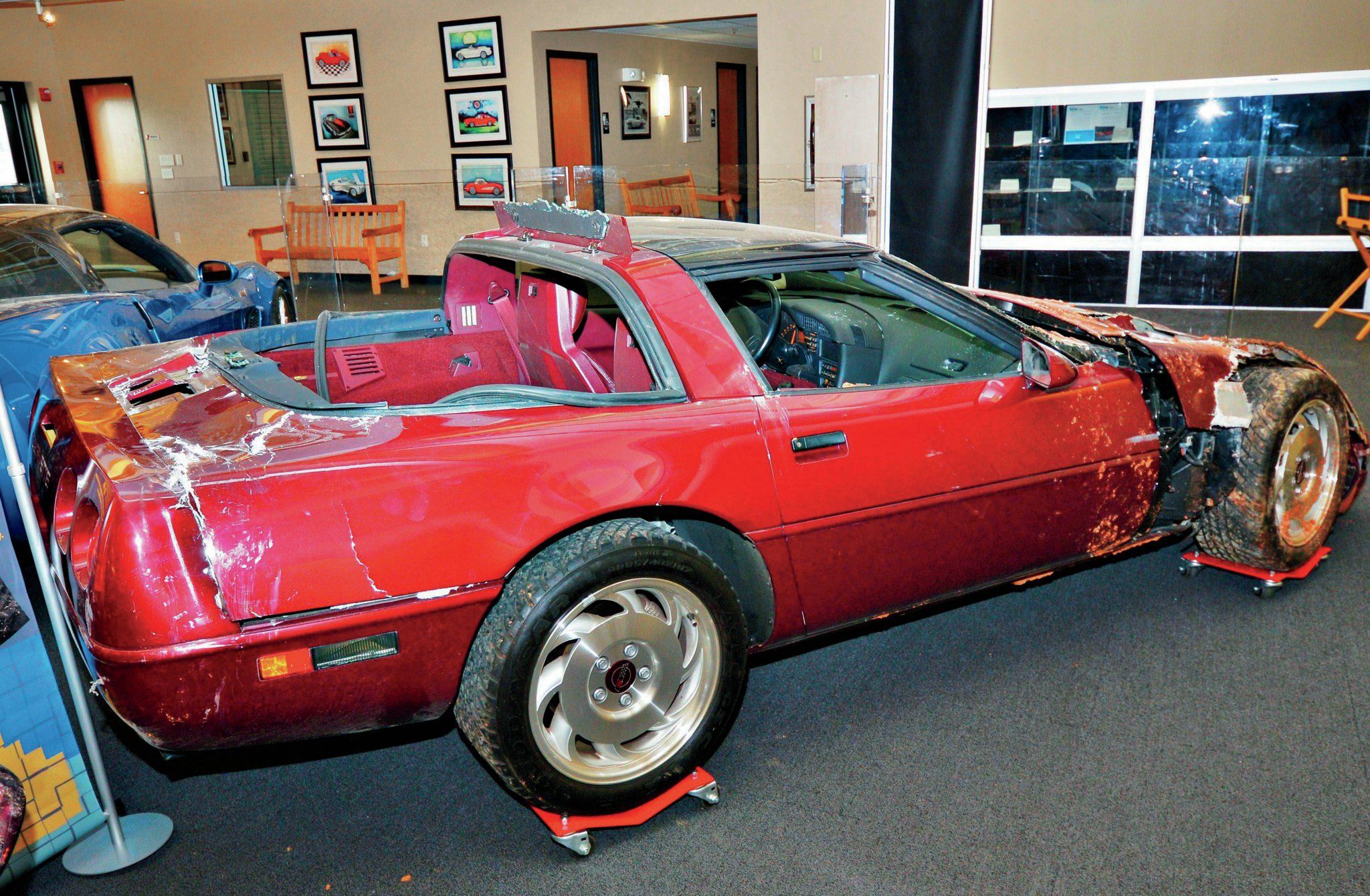 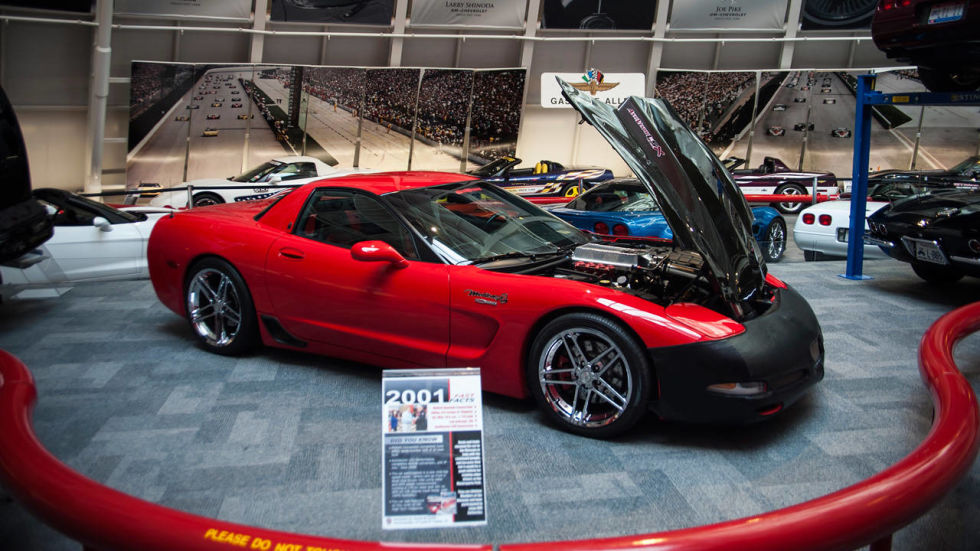 Now, this Corvette was something really special. It’s called the Mallett Hammer Z06 and it was donated to the museum by Kevin and Linda Helmintoller of Tampa Bay, Florida. They donated the car was in hopes that it would be used for hot laps and driver training at the Corvette Museum’s new motorsport’s park. This particular Hammer Z06 had been very heavily modified to the point that it was putting out almost 600hp to the rear wheels. Prior to being donated, it was Kevin’s daily driver. It was the last of the 8 cars to be found, and as you can see here it was also damaged beyond repair. 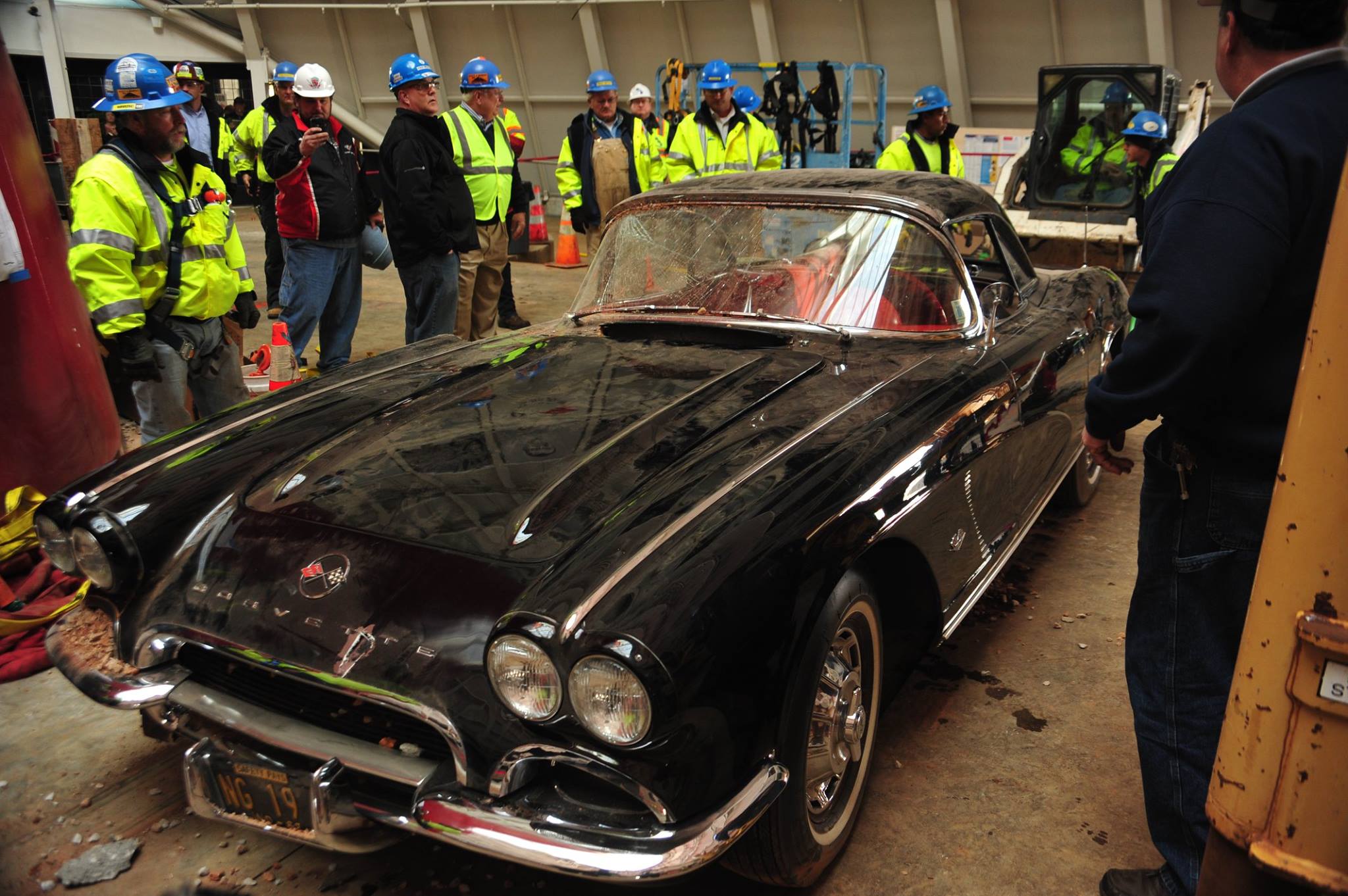 This car was very special because it marked the last year the first generation C1 Corvette’s were built. With its tuxedo black exterior paint color and bright red interior it was just a great looking car all-around. It features the 360hp fuel injected version of the 327 cubic inch motor. 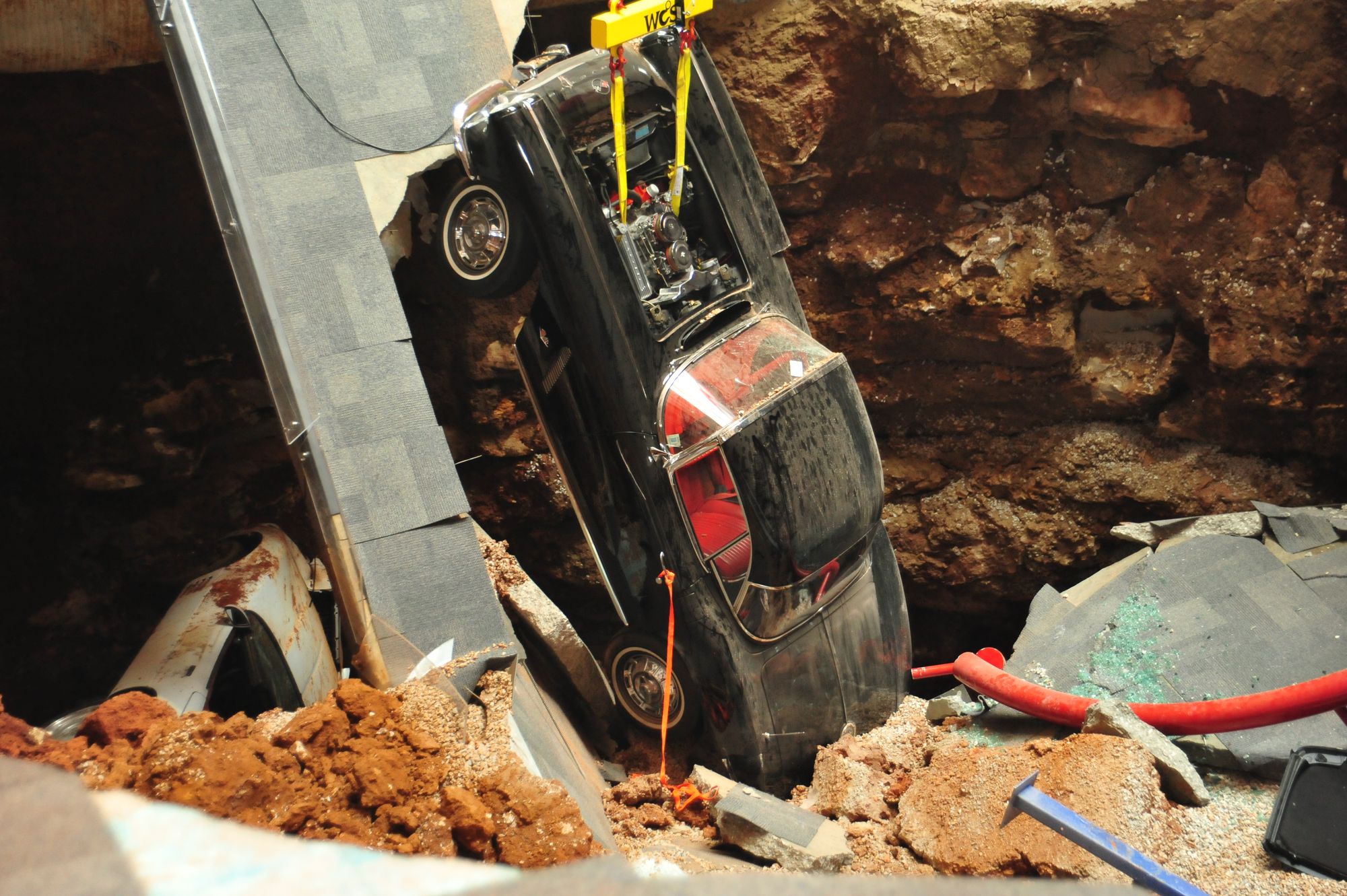 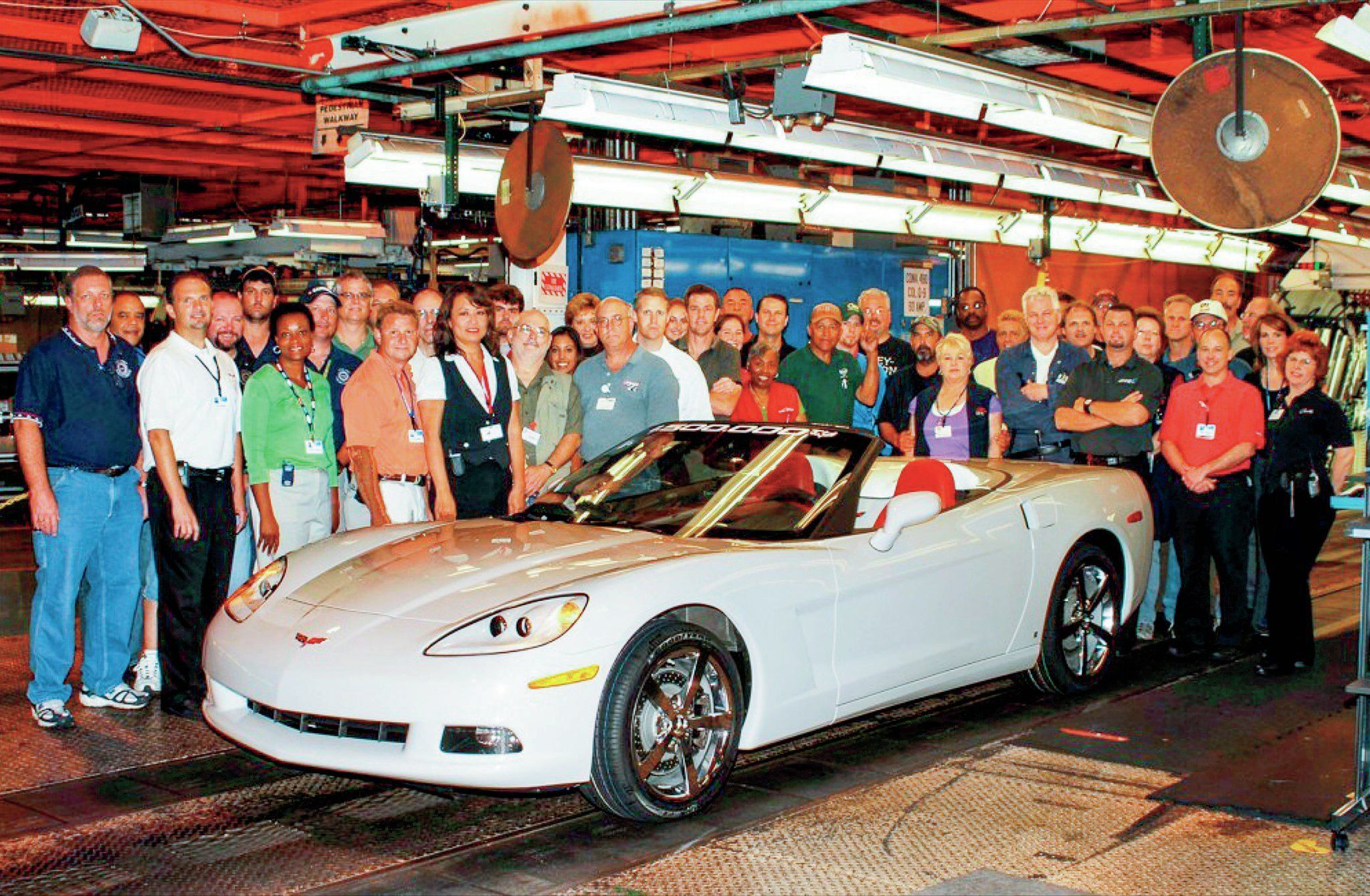 1.5 millionth prior to getting hood stripe
Photo: superchevy

The 1.5 millionth Corvette rolled off the assembly line as a 2010 model year Grand Sport Convertible nearly 56 years after first Corvette was made. Following in the tradition of that first Vette, the 500,000th, and 1 millionth, it was painted white with red interior and a black top. Providing power was the very reliable and incredibly powerful 430hp LS3 V8. Unfortunately, this iconic piece of automotive history was severely damaged in the sinkhole. It took more than a week for cleanup crews to lift the car out due to a massive boulder wedging it into the dirt. Experts deemed the car damaged beyond repair. 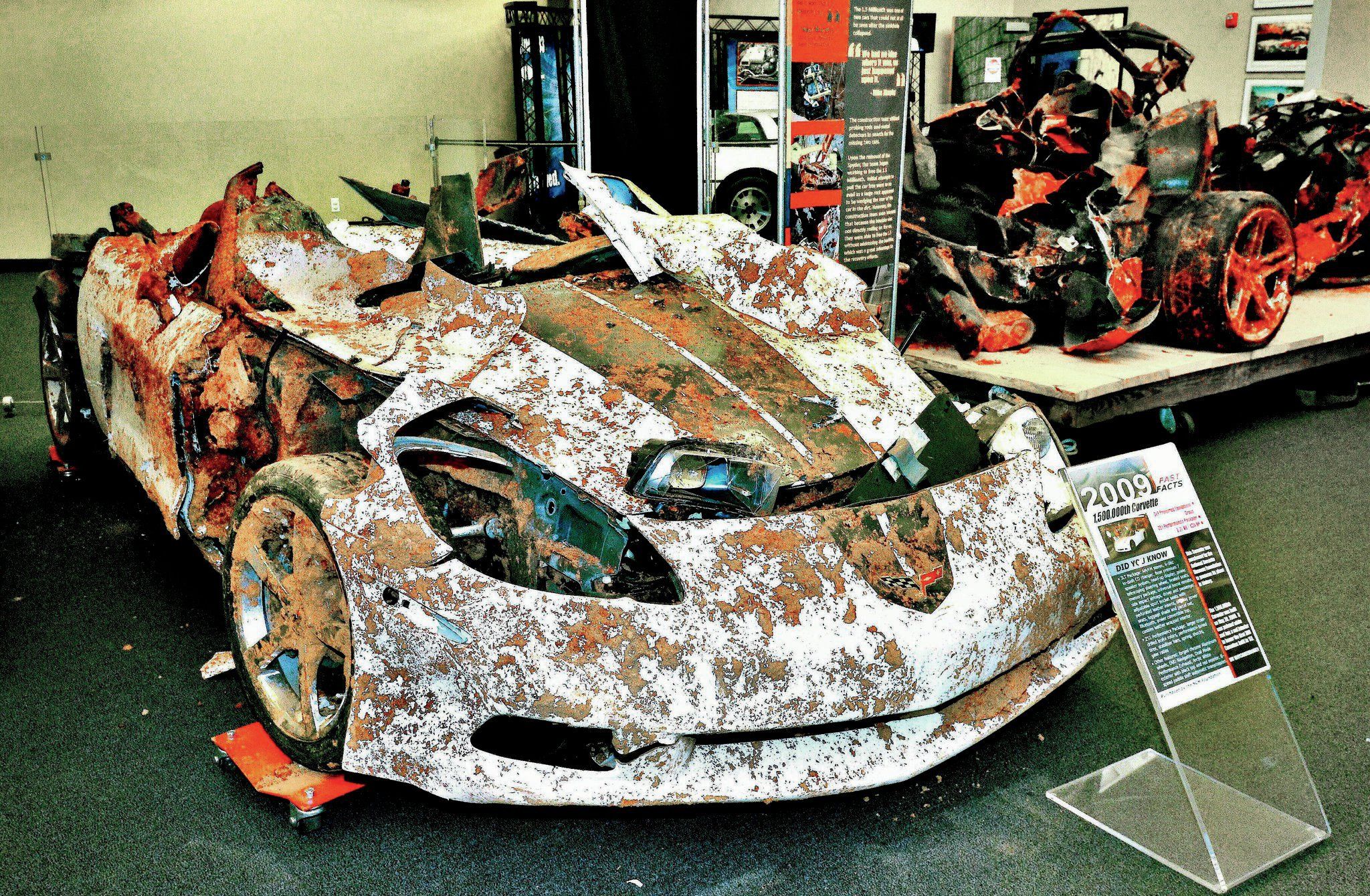 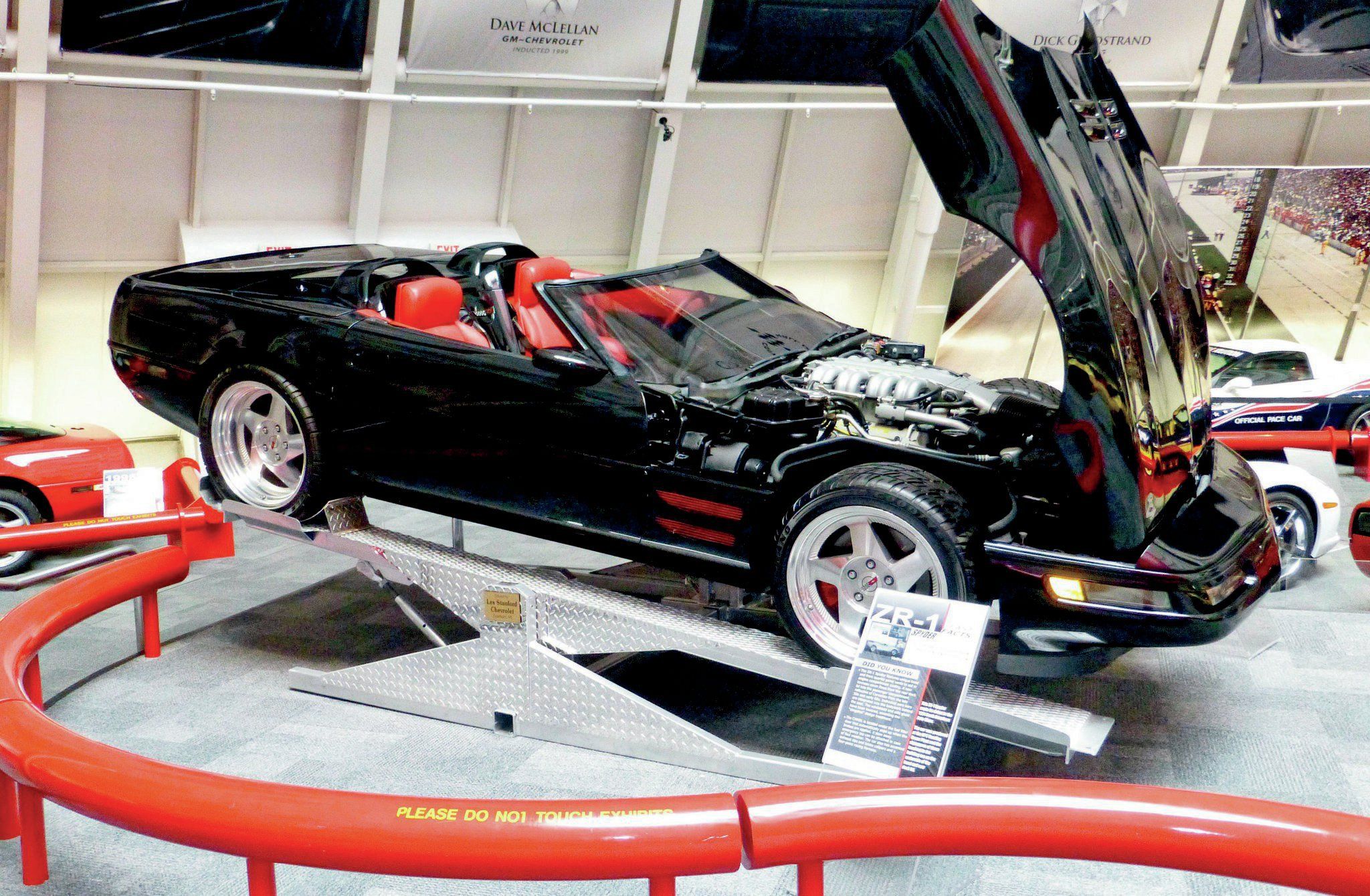 Now, this was one of the two cars that happened to be on loan from General Motors at the time. It’s the 1993 ZR-1 Spyder, which was the more hardcore version of the 40th Anniversary Ruby Red Corvette, but in convertible form. It featured a slightly more powerful version of the 5.7L V8 producing 405hp. When the jet black Spyder fell into the hole, it pulled a nose-dive straight into the ground like a lawn dart. This made it particularly difficult to get it out of the 30ft deep hole; apparently it required workers to climb down in the hole with shovels to dig it out before it could hoisted out by the crane. This was the second most valuable car to be engulfed by the sinkhole at more than $250,000. 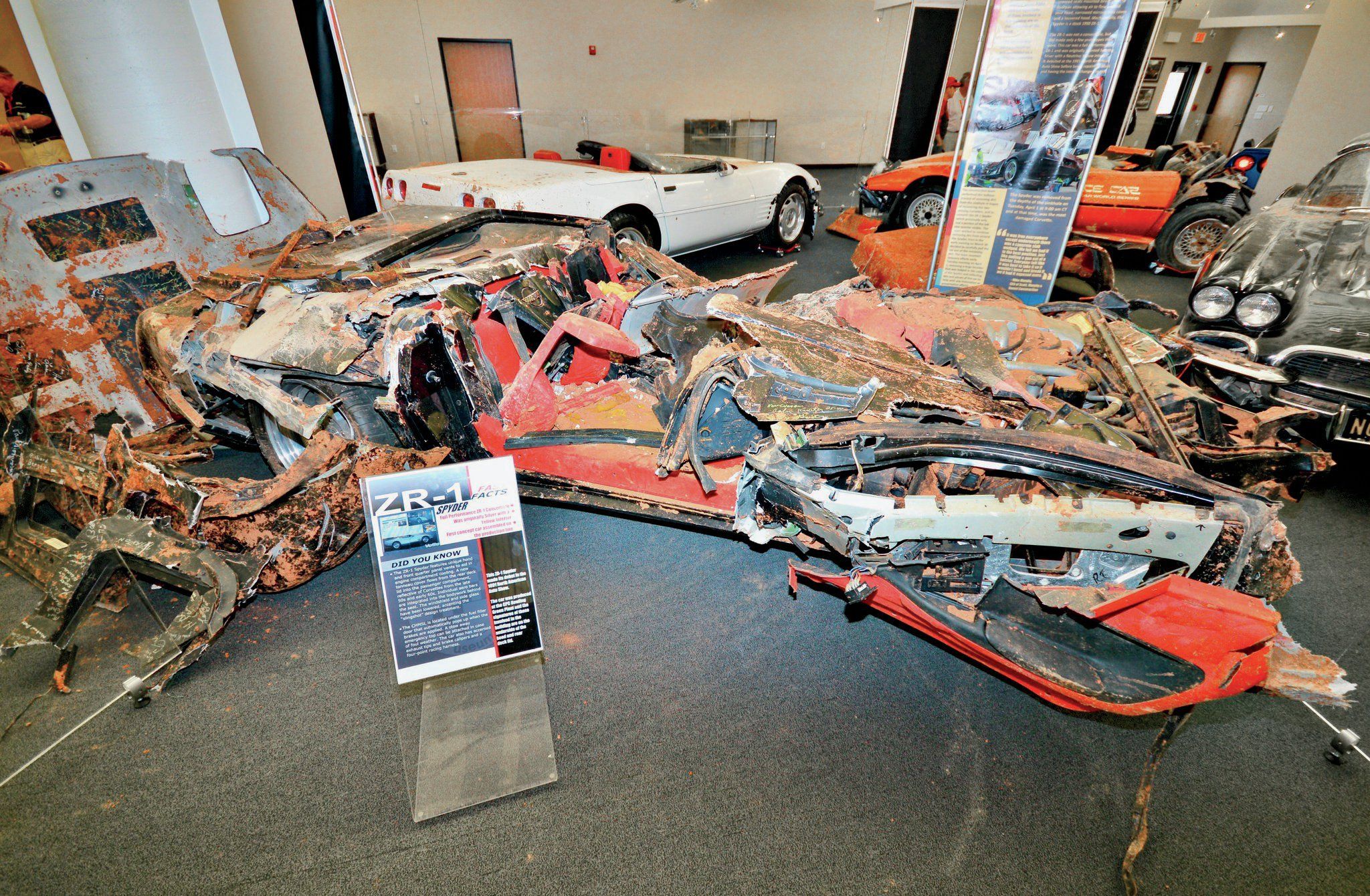 Even though General Motors originally planned on restoring all eight of the Corvettes, once all of the cars were removed from the sinkhole, it was determined that only three of them would be restored. 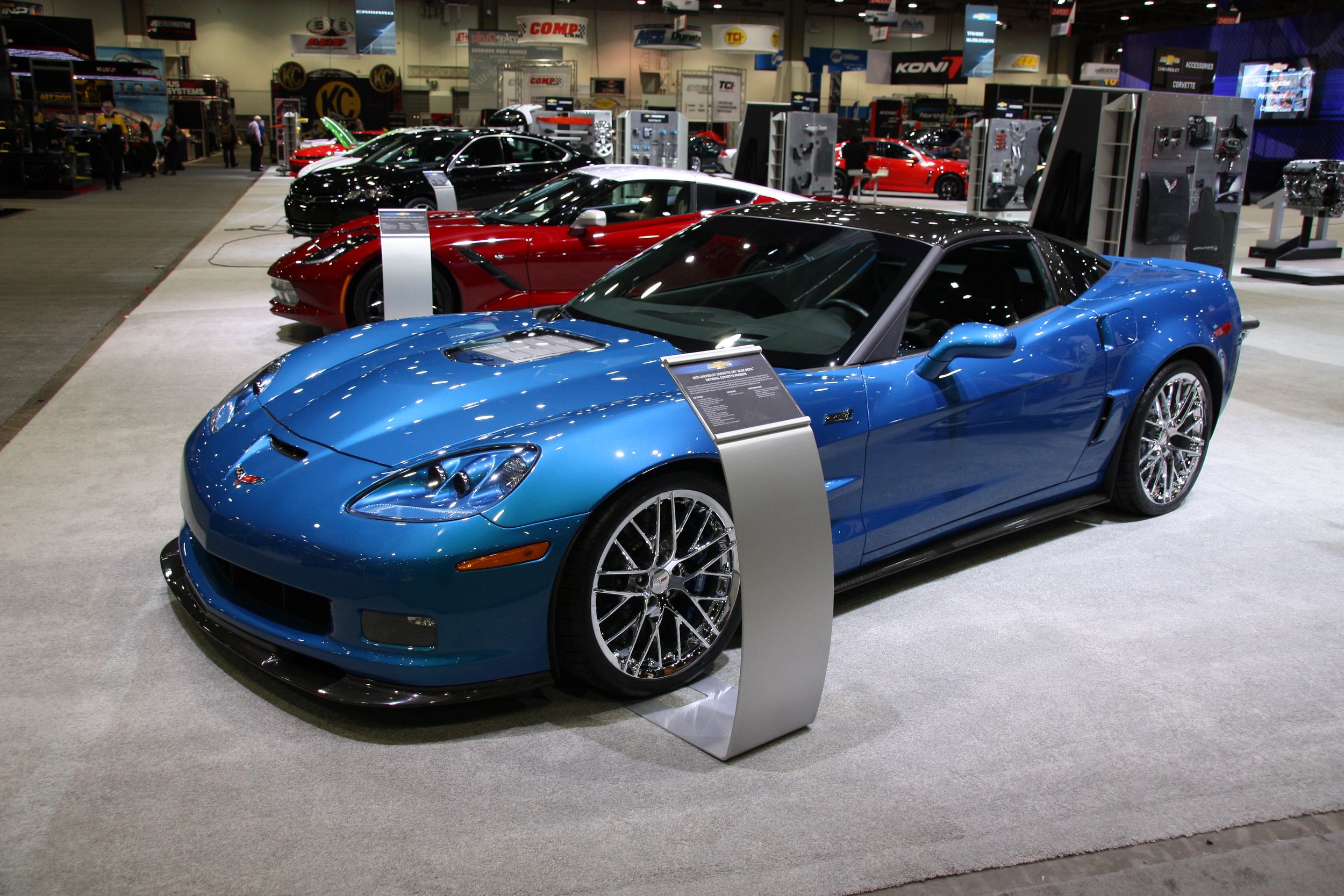 The car that easily recieved the least amount of damage was the Blue Devil ZR1. As a matter of fact, Chevy engineers felt so good about it that they hooked up a battery charger and after a few attempts, the supercharged LS9 came to life. It was able to drive out of the building under its own power, but it was leaking fluid so badly that it didn’t get very far. This was the first Corvette to be restored after falling into the sinkhole. Most of the damage was in the engine oil lines and the control arms. It was great to see this beautiful car restored back to its former glory. 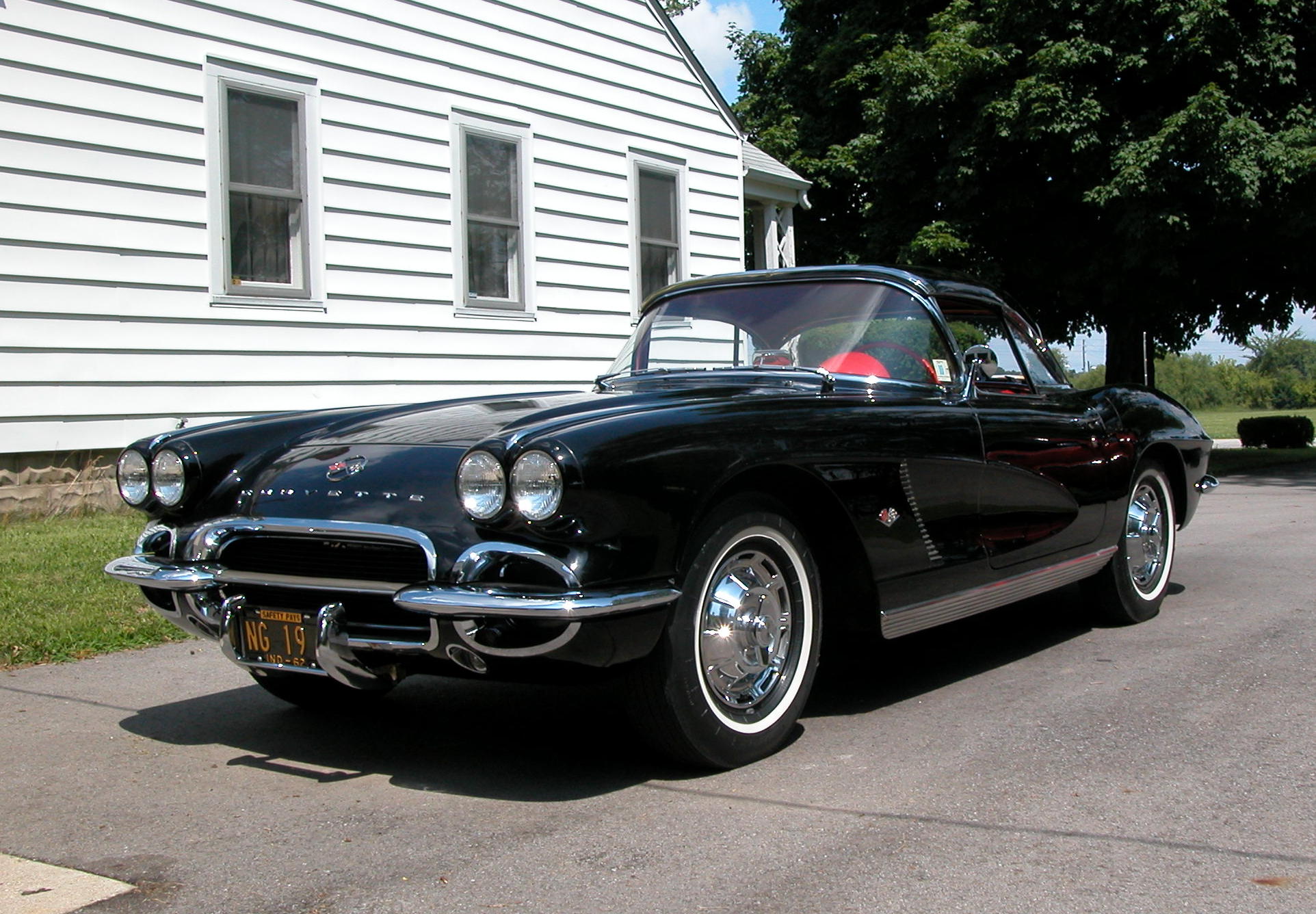 When crews first saw the 1962 Tuxedo Black Corvette with a multi-ton slab of concrete resting on the front end, it was believed that it would be joining the list of completely totaled cars. Luckily, that wasn’t the case. It has been restored back to its former glory for all to appreciate once again. The car only had minor damage to the fenders, but the frame and interior of the car was still in perfect condition. The car was donated to the museum by a Zionsville, Indiana, by a man named David Donoho. His reason for doing so was so that the car would be taken care of and maintained so as to be around for many years to come. 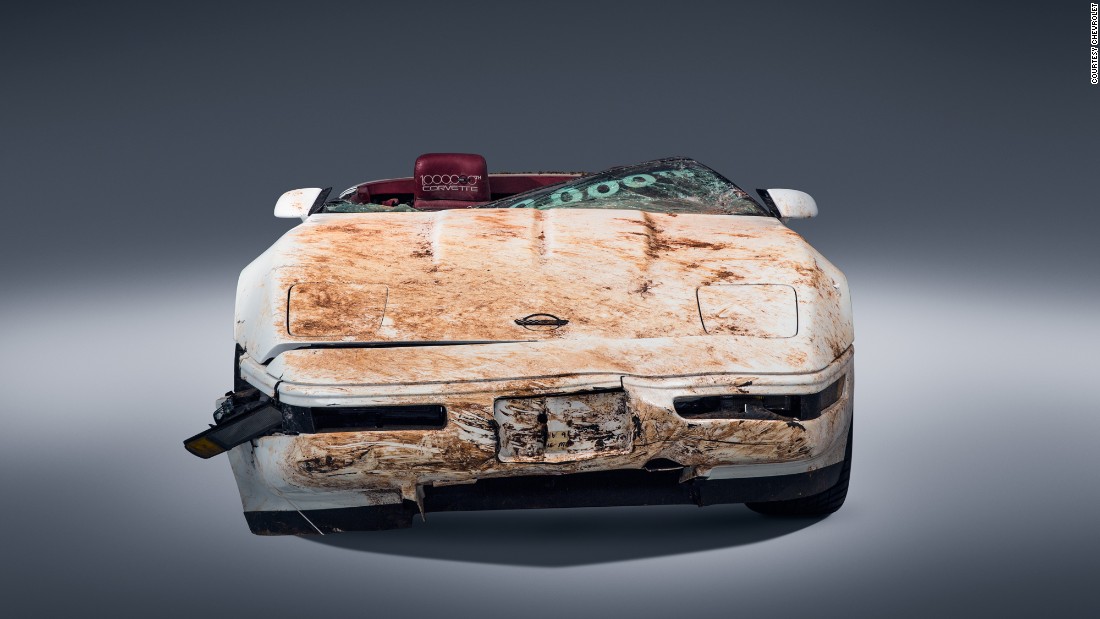 Being that this car is without a doubt the most valuable of all eight cars damaged in the sinkhole — it had an estimated value over $750,000 — many felt it had to be restored. The problem was, when it came out of the hole it was in pretty bad shape. Even though Chevrolet was very heavily involved in the restoration process, which meant they had unlimited access to genuine replacement parts, engineers realized that every part that had to be replaced took away from the historical significance of the car. Considering that when the car came out of the sinkhole it was absolutely covered in mud and looked as if it had been on the loosing end of a fight with a car crusher, the restoration specialists had their work cut out for them. 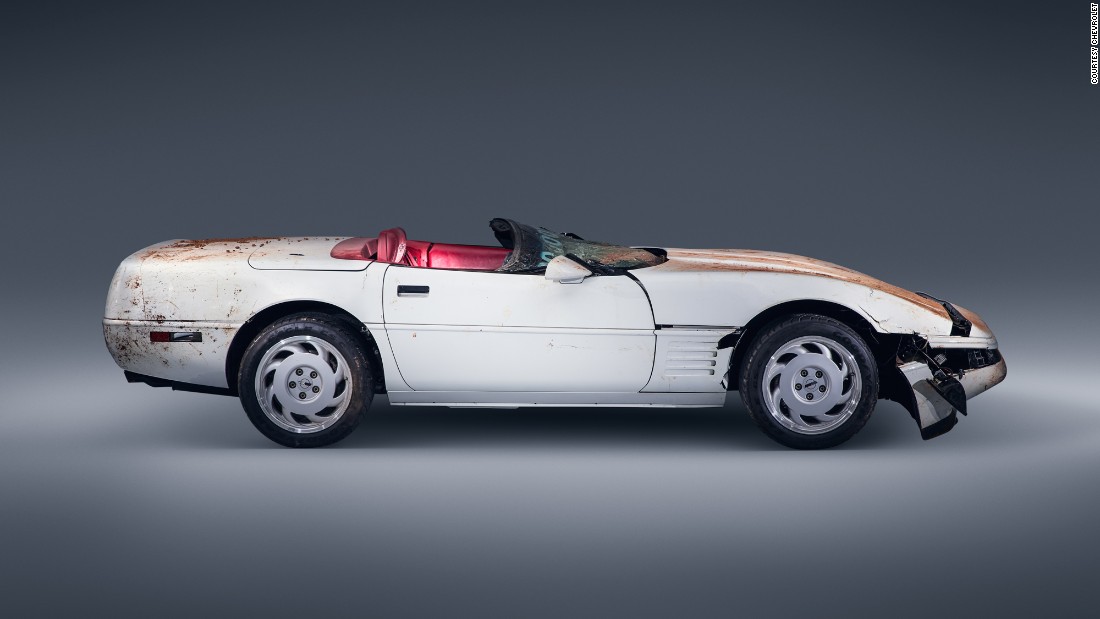 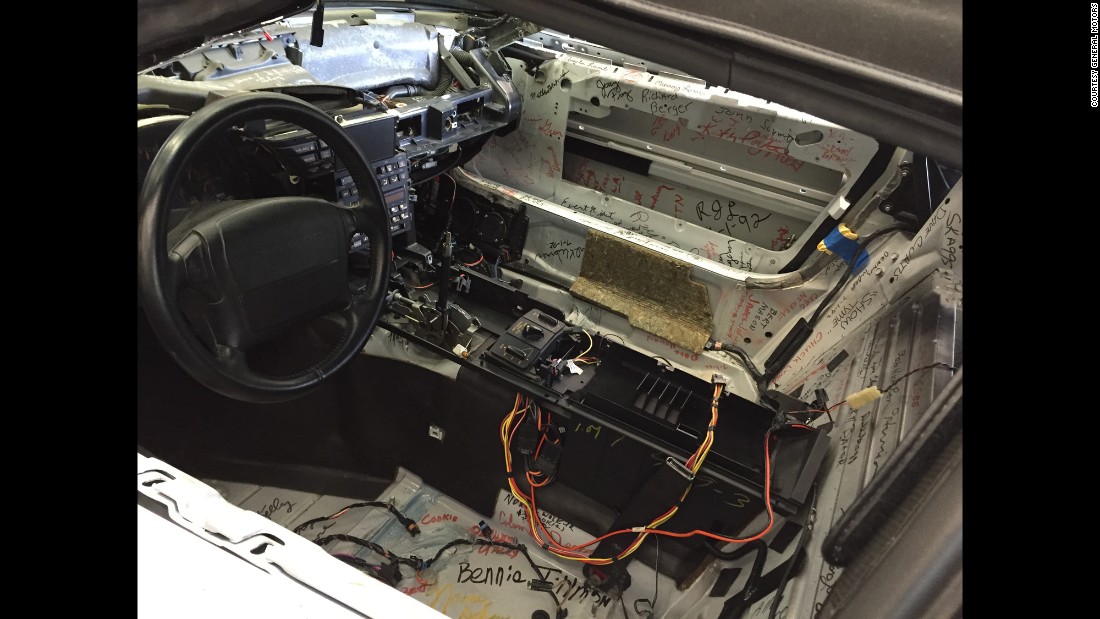 To make the situation even more interesting, as they started to disassemble the car they found countless signatures of all the employees that worked on the car at the Bowling Green factory. This was a particularly difficult challenge because now not only did they have to make sure that any replacement part was completely genuine, but also had to make sure that any and every signature was transferred to the new part. Luckily we live in a digital age where the signatures were able to be scanned and able to be reproduced to make an exact replica. We can’t even imagine how painstaking the process must have been taking each part and assessing wether it needed to be repaired or replaced. 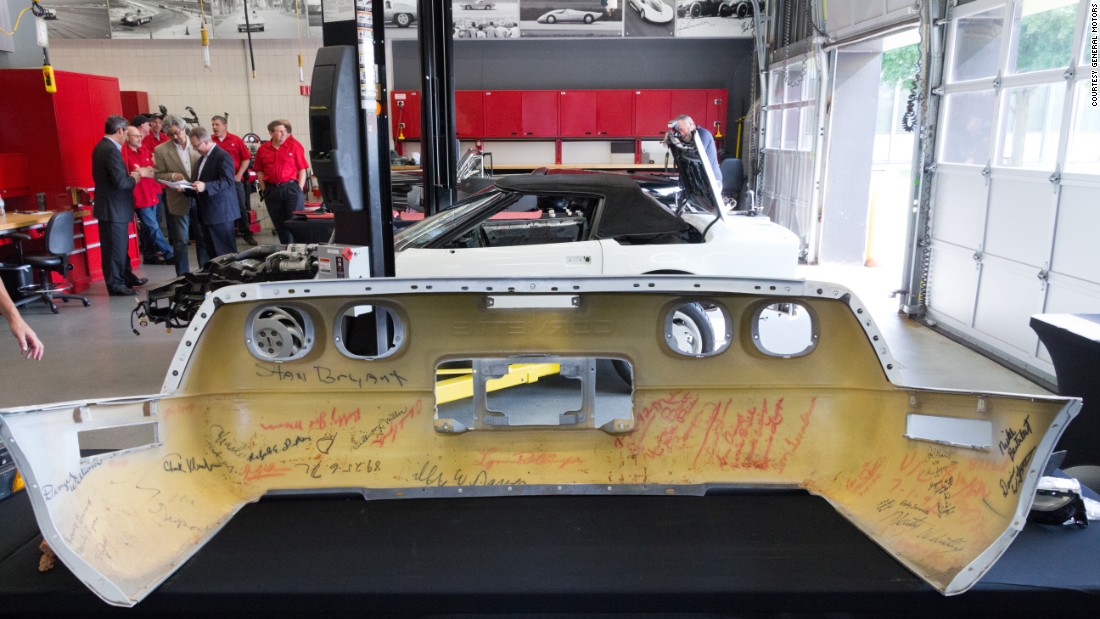 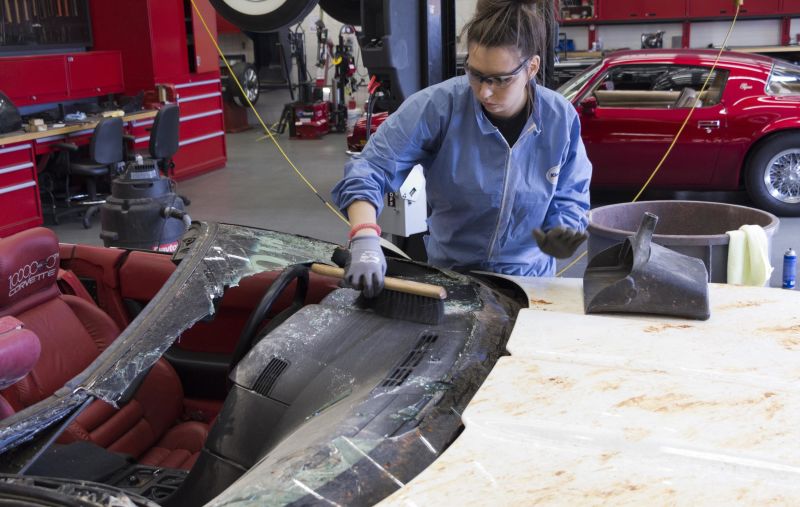 The restoration process reportedly took over 1200 hours over the course of a four-month period and was completed nearly 19 months after the sinkhole first happened. Most of the original parts were able to be saved, but unfortunately, there were a few that ultimately had to be replaced. 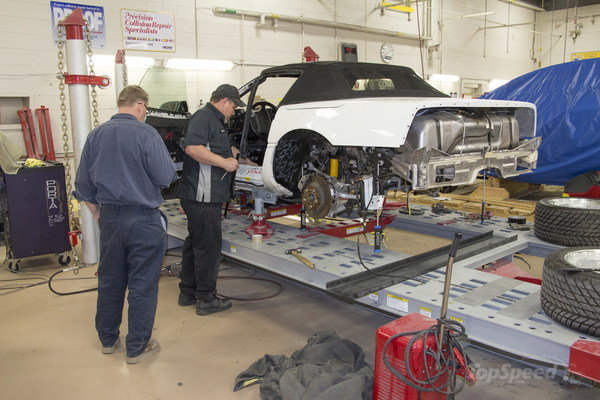 Once all was finally completed, the car looked as good as it did when it was brand new. Because of its historical significance, they decided to have an official unveiling of the car at the Corvette Museum. There to do the honors was Corvette designer John Cafaro, Geberal Motors representative Dave Bolognino, and Angela Lamb, who was one of the many people to work on the original car more than 23 years prior. 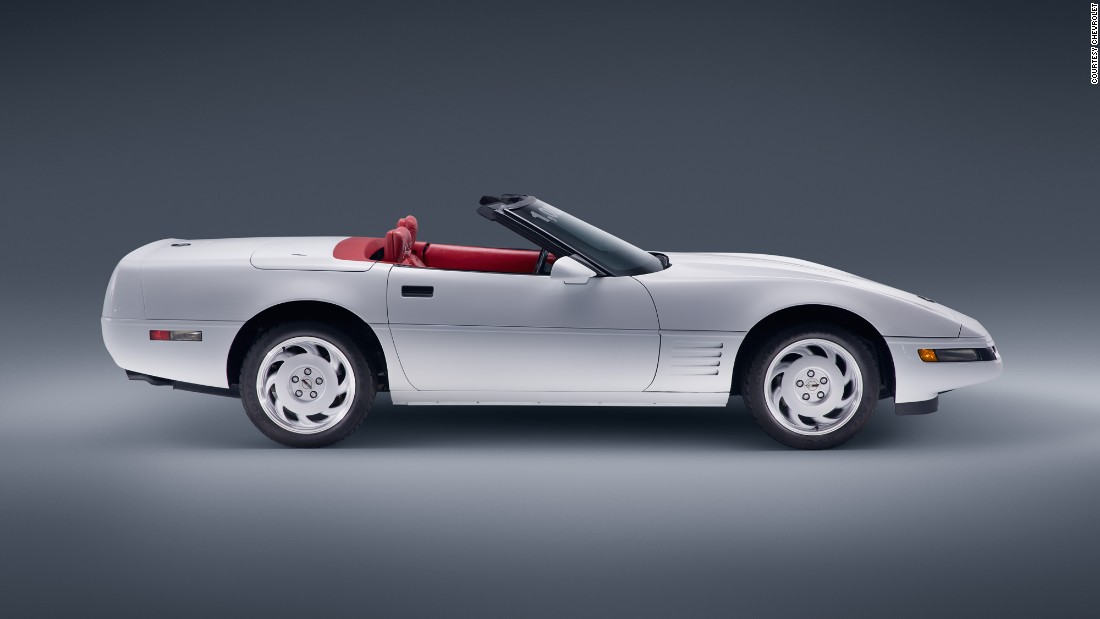 Almost one year later to the date, the sinkhole had been completely filled back in. There was a time where museum officials debated keeping the pit open because it had been the reason for a significant increase in attendance. But it was deemed that it would be unsafe for both spectators and the structural stability of the building. The museum ran a contest to see who could guess the amount of limestone needed to fill in the hole. The winner won a special print of the Blue Devil 2009 ZR1 prototype being lifted out. I wasn’t able to located what the final tally was, but it’s safe to say we are talking about multiple tons of material. 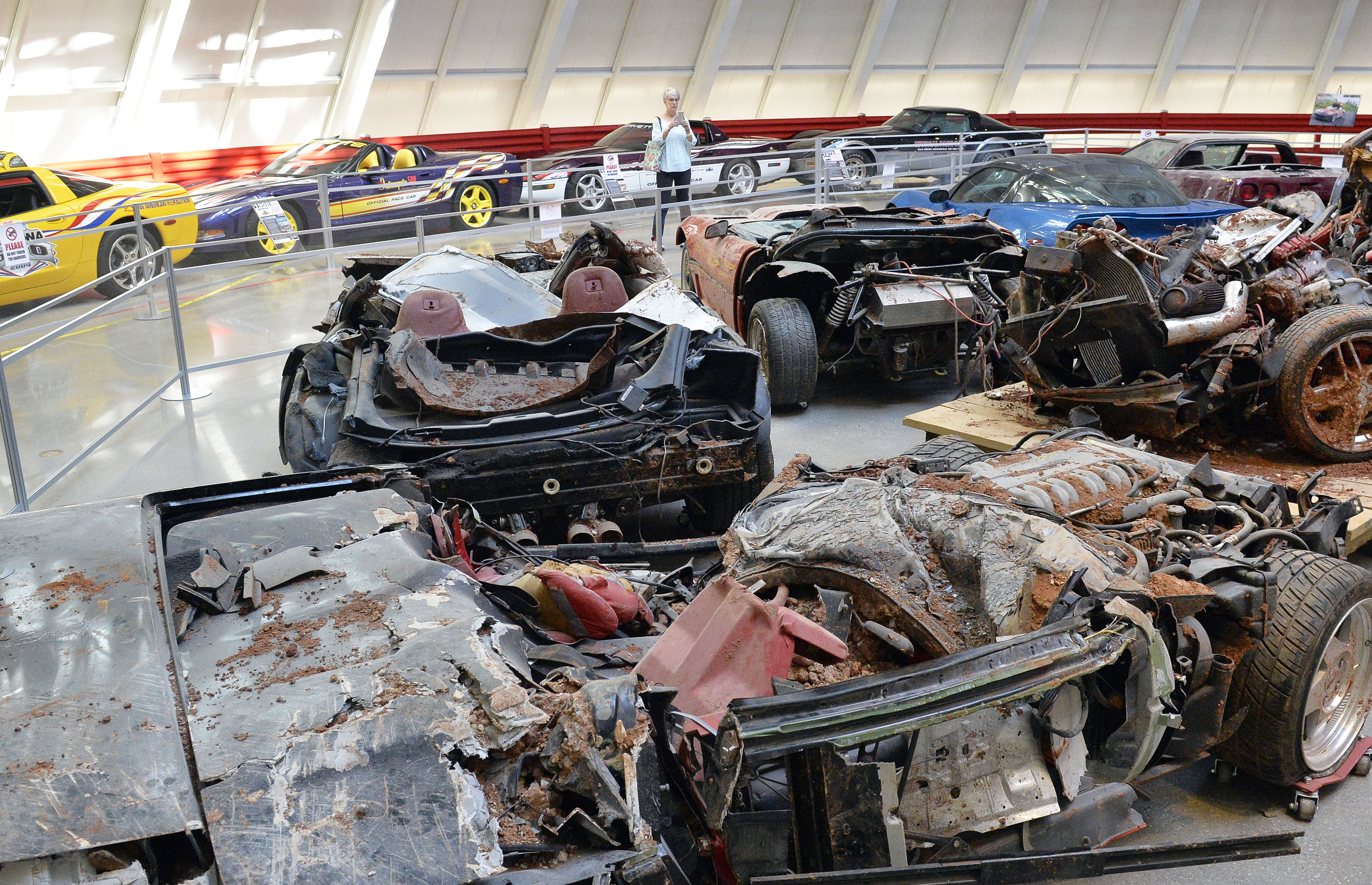 Even though only three of the eight cars damaged were restored, all five damaged cars are still serving their purpose. Sitting there in almost the exact location where the massive sinkhole once was, sits the completely destroyed cars in all their glory. There is something about seeing all that destruction that is incredibly appealing. Some people say its like seeing the worst car accident you’ve ever seen up close and personal. I guess it’s similar to the rubberneck theory. 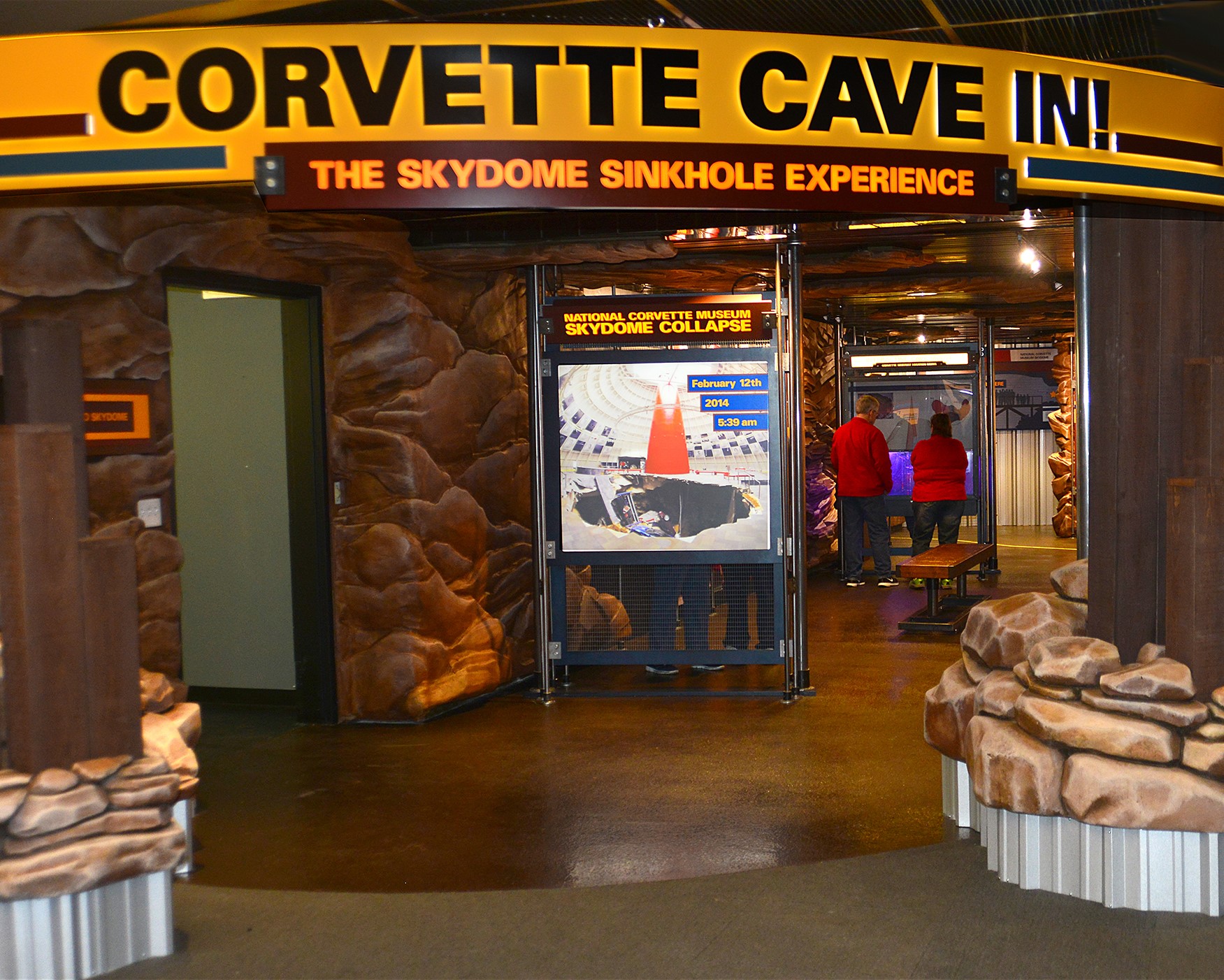 The museum may not have been able to keep the pit open due to safety and financial reasons, but they still could cash in on the destruction caused by mother nature. There now sits a yellow line that indicates the outline of where the sinkhole once sat. They are even selling rocks and dirt from the sinkhole at the gift shop for $10 a jar, and they have sold over 3,000 of them! Museum officials know that this spike in attendance won’t last long. They know once the curiosity wears off things might go back to what they were previous to the massive hole. 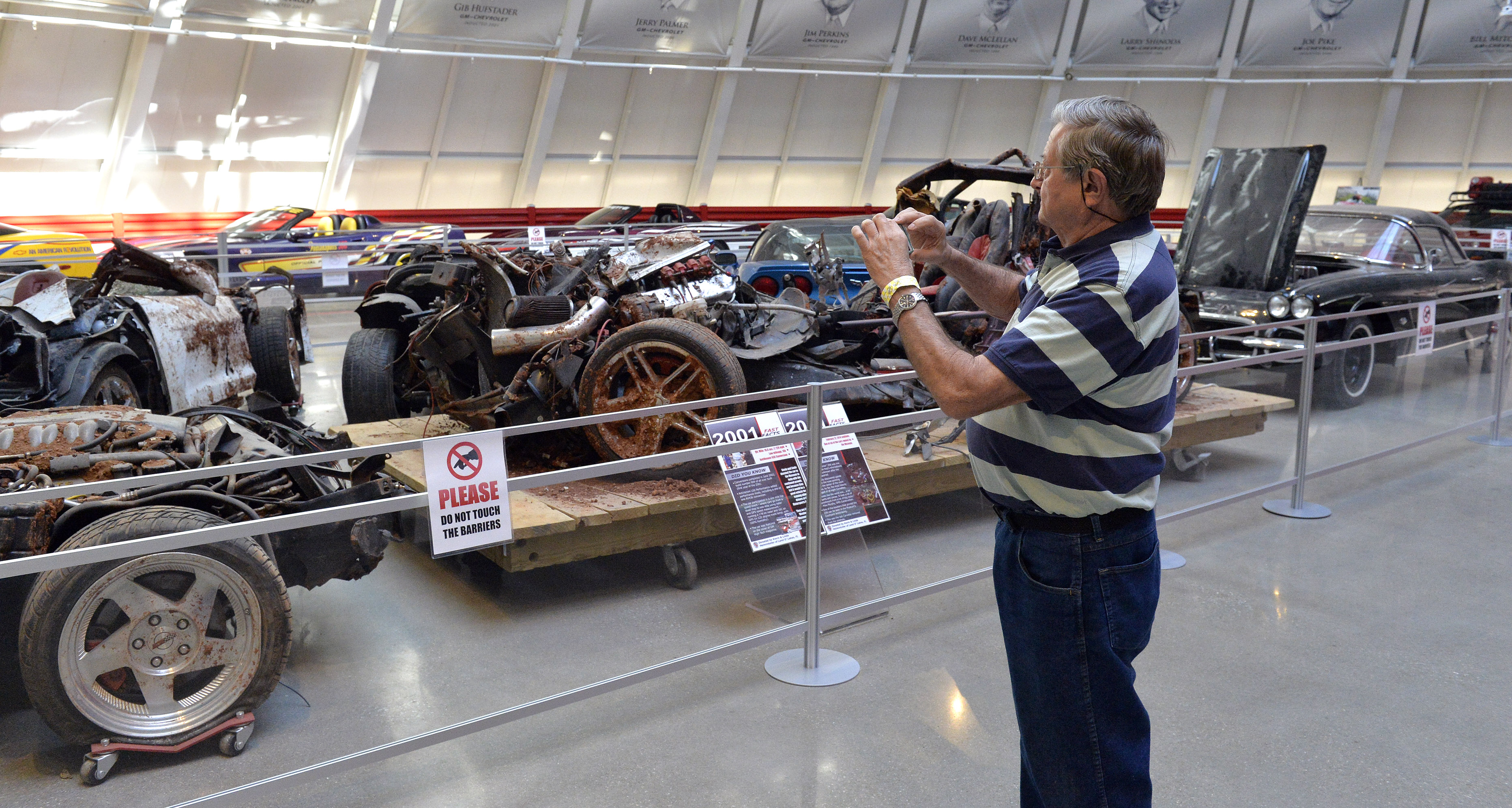 Here is the video footage of the sinkhole taking place during the we hours of the morning on February 11th, 2014.

This is footage of the Blue Devil being hoisted out up the hole.

The last car, and also the most heavily damaged car, the Mallett Hammer Z06 to come out of the massive sinkhole