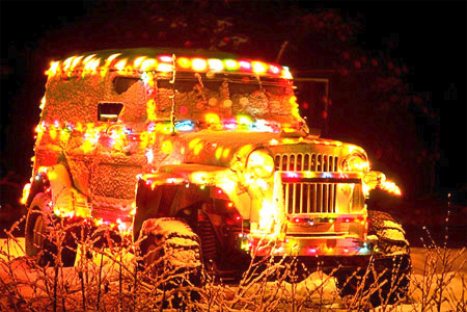 For some of us, it’s a certain holiday movie. For others, it’s a song. It may take a combination of multiple stimuli to put you in the perfect Christmas mood. Don’t feel bad. It’s not everybody’s favorite holiday, but there comes a point where it’s easier to join ’em than try to beat ’em. Since we’re all about cars that have made an impact in the History Garage, it only stands to reason that we’re all about the right car decorations.

If these twelve images of cars decorated like someone thought Santa needed a beacon don’t have you singing Jingle Bells, then nothing’s gonna do it.While you’re at it, sip some eggnog while you thumb through. That’ll work. 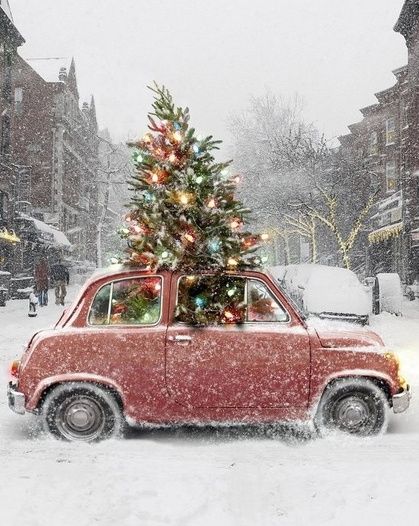 If you thought Clark Griswold had trouble fitting that tree into their living room, try cramming your lighted gift canopy in your European two-seater. This owner even managed to string lights that work. The big question (other than how does he drive this thing) is where are you supposed to put the presents? 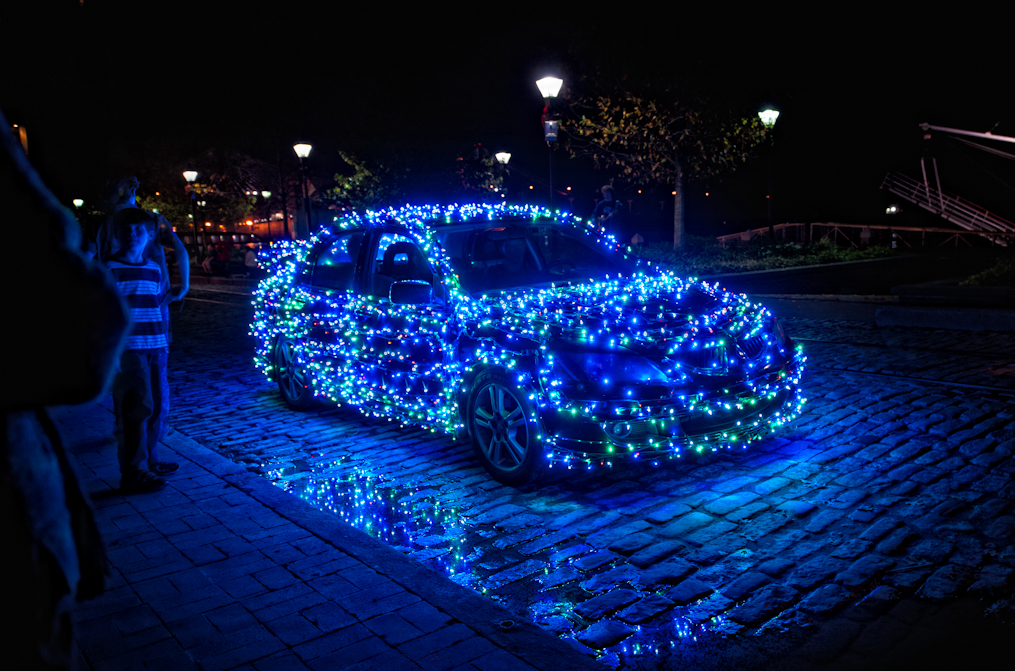 Apparently, the owner of this Pontiac G8 took the song literally when it said, I’ll have a blue Christmas... Funny, but blue never looked so lovely as it does on this G8. Perhaps it was the demise of the Pontiac brand in 2009 that caused this car owner to go all blue for Christmas. Maybe this is really a Hanukkah car. Either way, what a sweet tribute to the holidays and Pontiac.

This truck reminds me of Mater, the character from Pixar’s movie, Cars. It would be easy to overlook the driver, in light of the two-story Christmas tree loaded on the flatbed. I don’t remember the part in Cars where Frosty the Snowman drove Mater into a field. Perhaps this scene is from the Frosty-Mater Holiday mashup special. Maybe I’ve had too much eggnog. 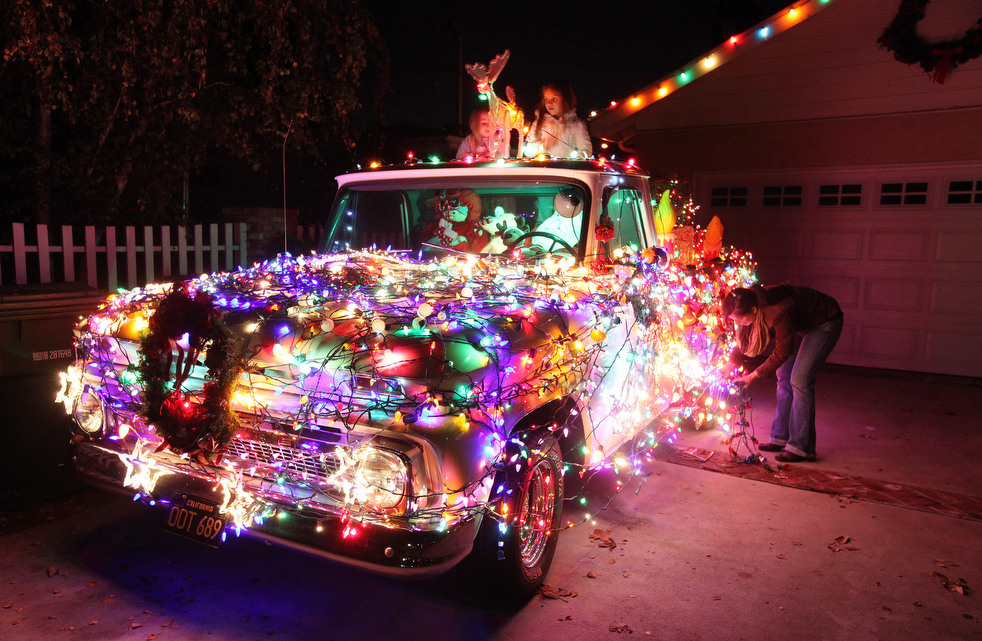 Honestly, officer, I don’t know how you could accuse me of a missing tail light. This could be the safest ’60s Chevy pickup still on the road. There’s enough Christmas spirit wrapped around the chrome bumpers of this truck to vector in alien spacecraft. Considering the trio behind the steering wheel, that could be a terrible first encounter. The driver doesn’t even have a face and there are children in the flatbed! 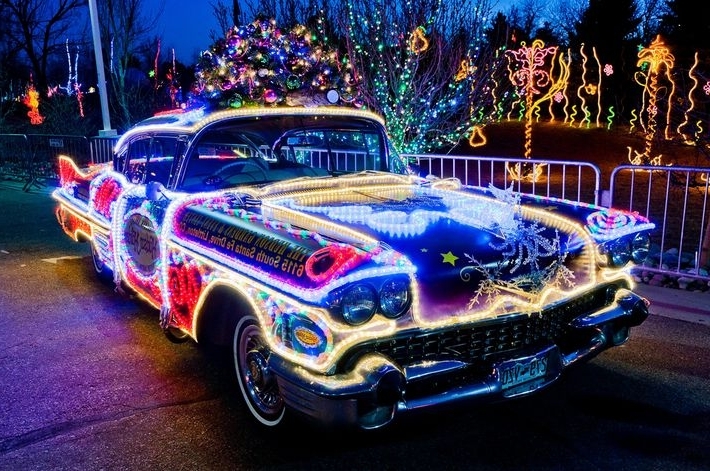 The ’58 Sedan De Ville was meant for this. None of them was ever as brilliant as this tricked out Caddy. It also never looked more safe. You may never feel the compact car bounce off of you while driving this car, but they probably won’t hit you either. Everyone can see you coming for miles. We may also be blinded from the experience. Merry Jiminy Christmas to you, my friend. 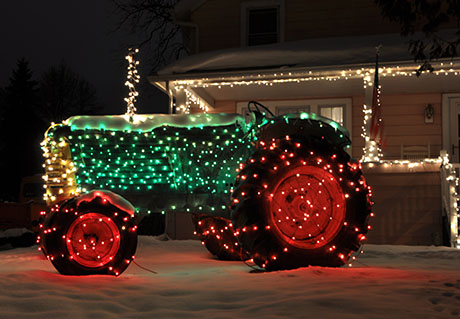 First of all, if you’re driving this one down the road, then you have the best mechanic in the world. These old tractors have a reputation for going forever, but this one is over half a century old. Not only that, the lights over the wheels would probably stop working once you rolled over them. You know how it is, one goes out, they all go out. 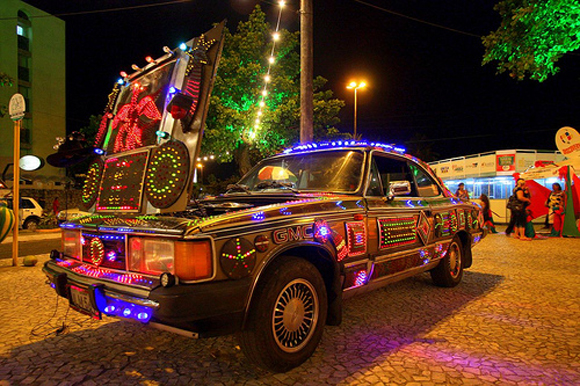 At first, I thought this was a Nova. Someone put a GMC over the wheel well, but the rims appear to have a Chevy emblem. I couldn’t find a car produced in the 80’s produced by either manufacturer that looked like this. In fact, I doubt any car ever produced looks like this. With those gnarled panels, this is a driving party. The lights could be all about Christmas, but they could also say, “Hey, I like to party. You?” 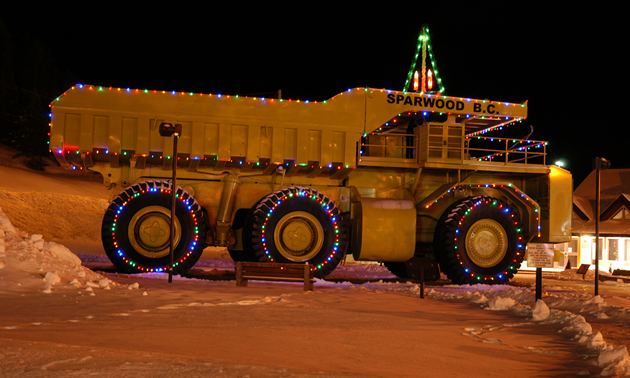 Did I drink too much nog or was that a mining truck at the last stoplight? It’s not often you get a chance to get close to one of these bad boys. It’s even rarer that you find one with Christmas lights. You’re gonna have to work in the mines to experience this beast. It might look like some sparse lighting, but considering those rims are taller than you, there’s a lotta bulbs on that hauler. 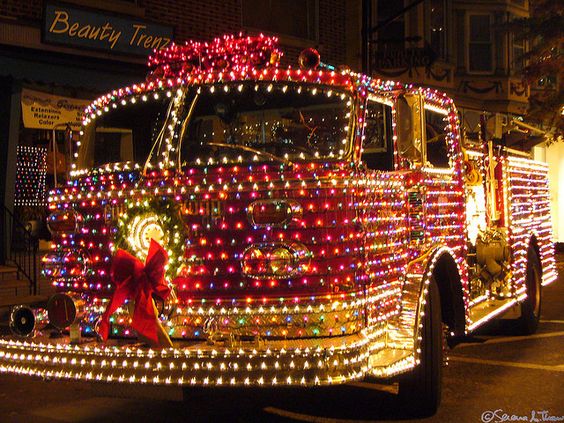 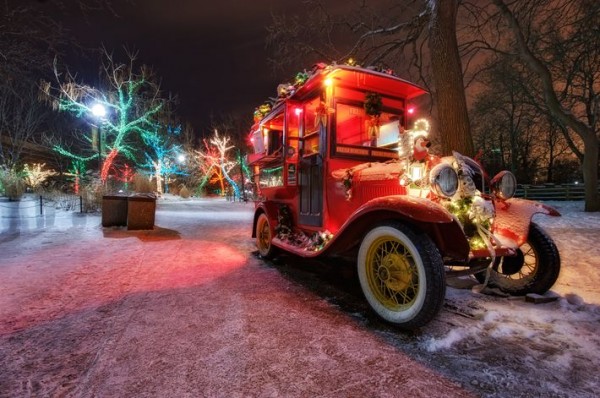 This is another tough call. That grill is not a Ford grill and it’s been modified to the point I can’t identify the manufacturer. If I had to guess it is a Ford under there, but I can’t be sure. In any case, the subtle decorations on this truck are the best modification of them all. The is the classiest Christmas car in the group, even though it’s a truck. 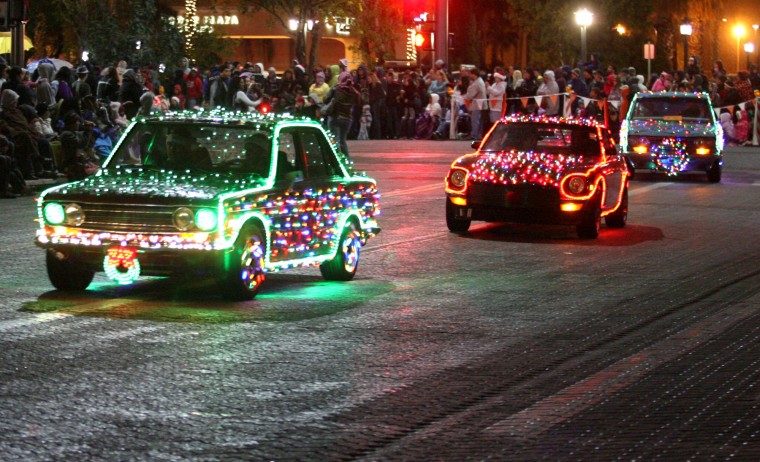 Who doesn’t love a classic Datsun? I don’t wanna know the person who doesn’t appreciate a well-preserved classic like these. Easily the biggest oversight by Nissan in recent history was their failure to revive the Datsun look with the IDx concept car. For now, we’ll have to love these lit up beauties. 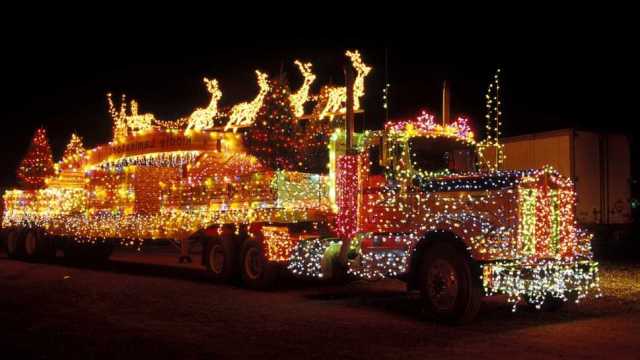 If you can identify anything on this bad boy, you win forever. This rig and trailer beat every other entry on this list, earning it the #1 spot on my Christmas Cars, even though it’s definitely not a car. It may take a nuclear reactor to power the lights on on this truck, but well worth it. Bravo truck driver person, bravo.